Woman Invites 16 Guys She Matched With On Dating App To The Same Date, Watch Video

Many people have had the bad luck of going on their worst first date ever, like how a woman brought 23 relatives to her date to test the man, leading him to flee before paying the bill.

And now, a man explained his awkward first date with a woman with whom he’d been chatting on a dating app. They both made plans to go out together but he was left gobsmacked. He narrated, “As you guys know I’m pretty bad at dating, but I actually decided to go on a date for the first time in like a year and this is what happened – this is not a joke by the way.”

When he arrived for the date, he was greeted by 3 other men whom the woman had invited on the same date without telling him. The man turns the camera to introduce the group. Apart from the woman’s friend who said she was “forced to be here”, he pans the camera to the other 3 men as well. And not only that, later the number of men that showed up tallied up to 16, Mirror reports. 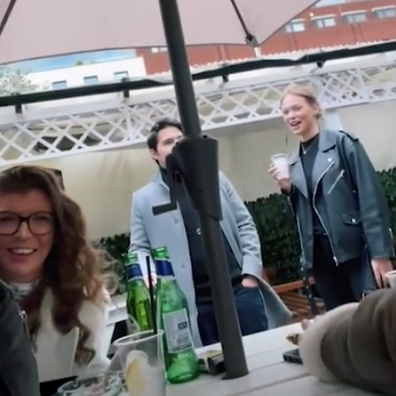 He then reveals the woman’s face who organized the surprise group date. She can be heard making a speech saying, “I invited everyone that I matched with on Hinge, so here you all are. I hope you get along.” You can watch the full video here.

A person commented under his video saying, “I’d simply walkout” to which the man replied, “Some did.”

What would you do in a situation like this? Would this be a major red flag for you? Tell us!