In Video: West Bengal Governor Pushes Sunil Chhetri Aside For A Pic, People Fume With Anger

Indian politicians have given us several opportunities to face-palm ourselves really hard. From calling a Manipuri activist ‘foreigner’ to defending rapists, the kind of cringe-worthy content they give is appalling.

Now, the internet is annoyed with the Governor of West Bengal after he pushed away famous Indian footballer Sunil Chhetri for a picture. 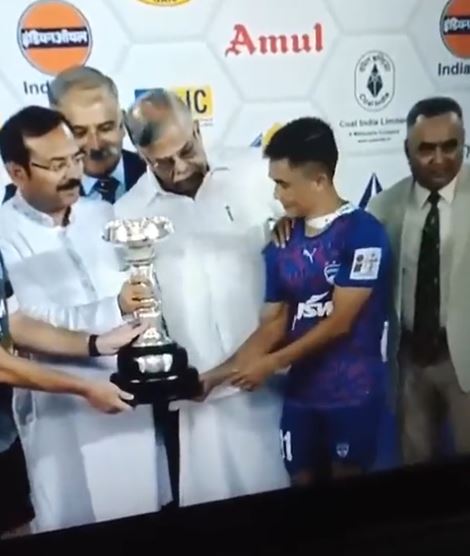 So, what happened is that Sunil Chhetri went up on the stage to receive the winning trophy after his team Bengaluru FC defeated Mumbai City FC at the Durand Cup Football Tournament.

To bestow him with the award was West Bengal Governor La Ganesan on the stage. While Ganesan was giving Chhetri the award and posing for the cameras, he pushed the footballer aside as he was coming in the way of him and the camera.

The video of the act went viral on social media.

If this has annoyed you, then wait for another video wherein Aroop Biswas, Minister for Sports and Youth Affairs in West Bengal, pushed aside Sivasakthi Narayanan during the post-match felicitation ceremony, again, for a picture.

Congratulations to Aroop Biswas, Minister for Sports and Youth Affairs in West Bengal, for winning the Durand Cup 2022. pic.twitter.com/DmC6xL5ClO

These visuals pushed the button of people online who were disappointed with the politicians’ behavior.

🤦🏾‍♂️🤦🏾‍♂️thats just all sorts of wrong!! Sorry @chetrisunil11 you deserve so much better than this!!

They are born arrogant and cheater.

Unfortunately sports is not respected in India except for cricket and cricketers. They get all the attention which they don’t deserve and also they are not justifying the game.
Others are appreciated for a day and then forgotten. Politicians felicitate them on election days.

Utter disgrace to the sports and the legend himself @chetrisunil11 . Shitty governance and a shitty mindset. These blockheads need to be fired. https://t.co/DH7b451epc

Ideally @chetrisunil11 should be in middle. The photo op politicians are such disgrace ! https://t.co/K44V4pkZlW

We have morons like these who care more about photo-op than progressing the future of sports in India.

Too many old sags sitting pretty at places where they have no business, no idea and no relevance to be at!!

These politician knows only how to fool people. Disgraceful
He should apologise publically. https://t.co/1U7UWZJo0l

Football as such is not going to develop as long as we don't get rid of people like this from powerful positions. Will someone dare to do something like this to @sachin_rt ? https://t.co/CyYKjgt4CK

It is disgraceful behavior towards an Indian football superstar. https://t.co/LAc9i4Raxz

The high-headedness is audacious. Not expected of a respectable figure, @LaGanesan. A public apology surely won't be too much to ask for. #IndianFootballpic.twitter.com/aEq4Yq6a6R

A lot of people in the comments section pointed out that he wouldn’t have dared to push the sportsperson in such a demeaning way had there been a Sachin or Ganguly in his place. Clearly, we have a long way to go when it comes to respecting and appreciating sports personalities who do not play cricket but bring accolades and honour to the country.