A child environmental activist from India- This is what you would get when you research Licypriya Kangujam on the internet.

One of the youngest climate activists globally who hails from Manipur has decided to lead the battle from the front against climate change. From meeting Greta Thunberg to standing outside the Indian parliament and urging PM Modi to pass the climate change law, she is doing all it takes for a healthy and sustainable future.

While she is well-known across the world for her commendable work, it’s people from the country who still haven’t recognized her as an Indian.

Just recently, an Indian politician from Lucknow, Manish Jagan Agrawal, tweeted how the ‘foreigner’ tourist is forced to show the mirror to the ruling government and bring their attention to the increasing filth around the Taj Mahal. 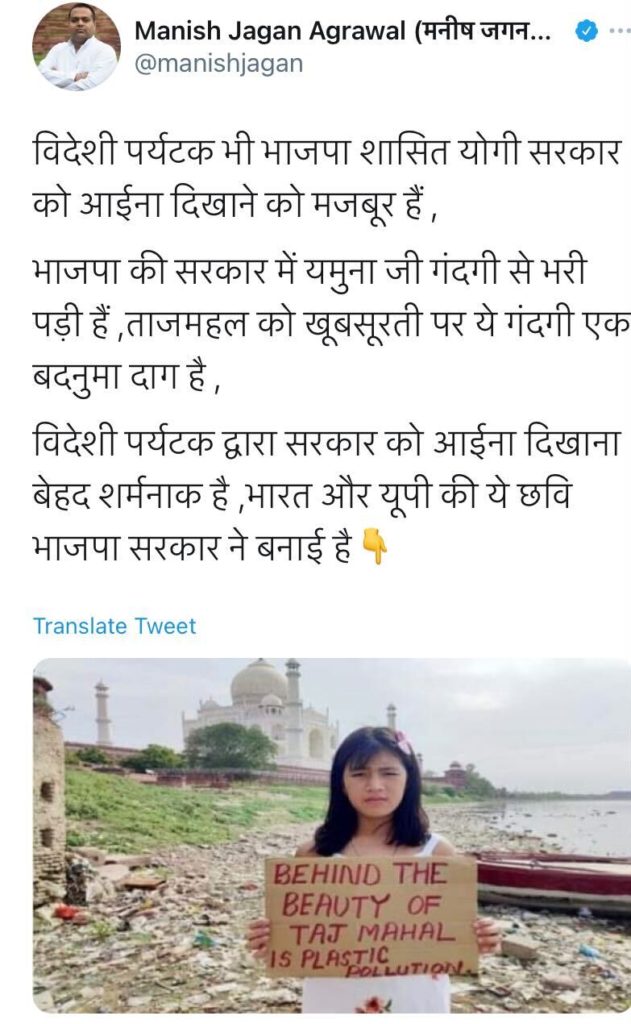 Agrawal was referring to one of the images shared by Kangujam wherein she highlighted how humans have destroyed the beauty of one of the seven wonders of the world by throwing garbage around it.

Whatever his intentions were, the political analysts’ tone-deaf tweet calling Kangujam, who belongs to the north-eastern part of India, a “foreigner”, highlighted how people from that part of India are subjected to prejudice, bias, and racism by their own countrymen.

Kangujam also called the leader out for his problematic tweet:

This was followed by people debating how because of this, people from the northeast are subjected to hate and bullying in their own country.

For many, except the Agarwals, Sharmas, Guptas, and Patils etc, we all are foreigners.

Being a political leader this is not about hurry this reflects the reality about the ignorance of the people from NE. if he don't know where Manipur is then he should give up the politics. Otherwise don't shout 'Educate Agitate Organise' line of Babasaheb

such shameful racist people ,they dont even check what they utter in hate for nationalist . she is more Indian than u ever thought of her concerns says it all . https://t.co/MfyvXM2wSj

This! Time and again! https://t.co/CYiCwwhXj7

Amount of racist comments this little girl is getting tells us why we will never be taken seriously on a world stage.
India sometimes makes me vomit..the filth sometimes this country demonstrates makes me wish it drowns in its own filth one day. https://t.co/ZH33fZwMVC

I've translated my name in Hindi. I hope that is enough to not be misidentified in my own country? @manishjagan https://t.co/DxgDK2IeBN

He can't even tell seven sisters name. What can we expect from the person like him?
Keep it up girl 🙌 https://t.co/xDwWaew9Pp

You make us proud – pay no heed to idiotic politicians. A good citizen is one that raises awareness about the things that can be improved for the betterment of all people. You did just that. Thank you @LicypriyaK https://t.co/2L8kWW3KRI

This is epic!! Well done @LicypriyaK 👍👍 In fact you are more Indian than these arrogant, uneducated, greedy third grade politicians. https://t.co/uj5yJSAU2j

Just another day in a north eastern's life trying to prove themselves as Indians https://t.co/slLKuPaXZH

This is the kind of differentiation belted out to North East folks by North Indians. https://t.co/lWMsX4Go2L

This is one of the many reasons, I want UP to have better opposition than SP. https://t.co/0ZZ1EuRZjO

Bullying, calling names, being subjected to hate crimes, what else would one expect from a country where its leaders are themselves doing such shameful acts and calling their own citizens ‘videshi’.