Last year, Bollywood actor Anushka Sharma and her husband and former Indian cricket team captain Virat Kohli were blessed with a baby girl. The couple was thrilled to share the news with the world. However, on multiple occasions, they requested the media to respect their privacy and not reveal the face of their girl, Vamika.

However, their privacy was breached yesterday during the ongoing second ODI match between India and South Africa in Cape Town, reported Zee News. The cameraman of a popular broadcaster panned the camera towards the stands where Anushka along with Vamika was cheering for Virat Kohli, who completed his half-century. That’s when Vamika’s face was revealed.

Inta sab privacy thing to not show baby's face just to bring her in the stadium and live telecast her! 🤷🏻‍♀️ https://t.co/eUkVTK7vlR

And ever since the video with Vimaka’s zoomed-in footage went viral, people were fuming in anger. Several fans condemned the act and slammed the broadcaster for circulating Vamika’s pics against her parent’s wishes.

This is what they said:

Virat to all those Broadcasters and Cameraman of Supersport for showing Anushka & Vamika in the stands! 👀

We'll, honestly it was terrible thing of them to do that by not respecting the privacy they needed!#AnushkaSharma #Vamika #Virat #Kohli pic.twitter.com/bz4FxOgMIz

Some also trolled the cameraman with memes:

This is probably the reason why they wanted to keep their daughter away from all the limelight:

how can people criticise Virat Kohli on just for his love for his daughter, and he's not only one player in cricket team, there're others also but nahi,sabhi ko Virat ko hi bolna hai, no one will question other players, https://t.co/PB0CQPp5ou

As soon as the pic revealing Vamika’s face went viral, both Anushka and Virat took to social media and penned a statement requesting everyone not to click/publish the images as requested earlier. 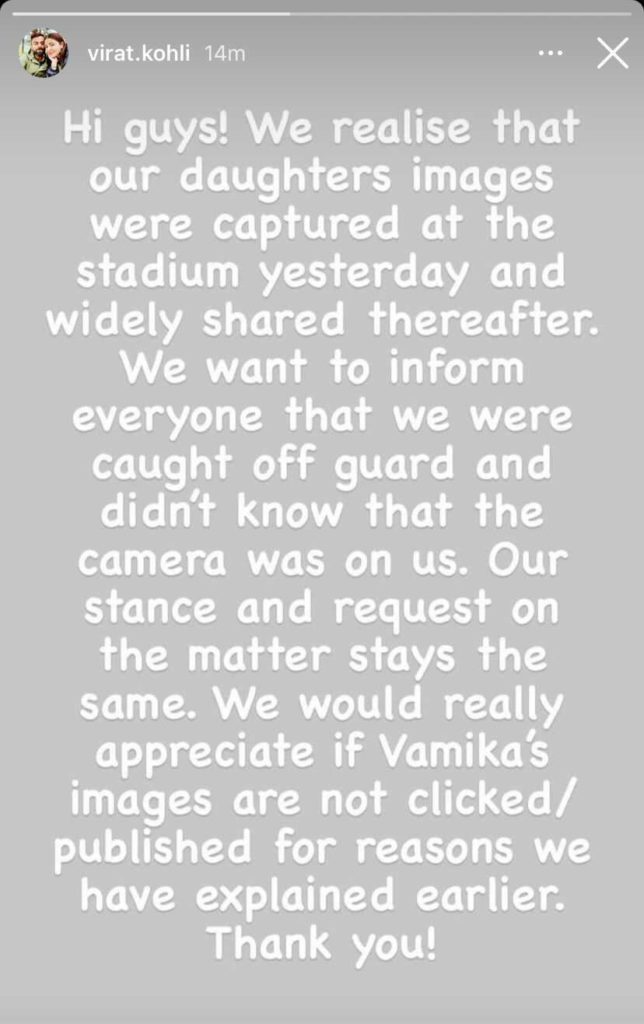