The cricketing fraternity and fans alike received the shock of their life when Virat Kohli announced his decision to step down as India’s Test skipper on Saturday.

Taking to social media, the skipper released a statement declaring his halt as Test Captain of India. He also thanked MS Dhoni for giving him the opportunity to take Indian cricket forward.

“I have always believed in giving my 120 percent in everything I do, and if I can’t do that, I know it’s not the right thing to do. I have absolute clarity in my heart and I cannot be dishonest to my team.”

And among many who got emotional listening to this breaking news was his wife and actor Anushka Sharma who took to Instagram and penned a heartfelt note for her husband.

Sharing an adorable pic with the sports star, Sharma penned a long post that reads:

I remember the day in 2014 when you told me that you have been made the captain as MS had decided to retire from test cricket.
I remember MS, you & I having a chat later that day & him joking about how quickly your beard will start turning grey. We all had a good laugh about it. Since that day, I’ve seen more than just your beard turning grey. I’ve seen growth. Immense growth. Around you & within you. And yes, I am very proud of your growth as the captain of the Indian National Cricket team & what achievements the team had under your leadership. But I’m more proud of the growth you achieved within you.
In 2014 we were so young & naive. Thinking that just good intentions, positive drive & motives can take you ahead in life. They definitely do but, not without challenges. A lot of these challenges that you faced were not always on the field. But then, this is life right? It tests you in places where you least expect it to but where you need it the most. And my love, I am so proud of you for not letting anything come in the way of your good intentions. You led by example & gave winning on field every ounce of your energy to the extent that after some losses I’ve sat next to you with tears in your eyes, while you wondered if there’s still something more you could have done. This is who you are & this is what you expected from everyone. You’ve been unconventional & straightforward. Pretence is your foe & this is what makes you great in my eyes & the eyes of your admirers. Because underneath all this were your pure, unadulterated intentions always. And not everyone will be able to truly understand that. Like I’ve said, truly blessed are those who tried to get to know you beneath what meets the eye. You are not perfect & have your flaws but then again when did you ever try to conceal that? What you did was to always stand up for doing the right thing, the harder thing, always! You held on to nothing with greed, not even this position & I know that. Because when one holds on to something so tightly they limit themselves & you, my love, are limitless.
Our daughter will see the learning of these 7 years in the father that you are to her.
You did good ❤️

People were all hearts on the lovely post that Anushka wrote so gracefully for Virat: 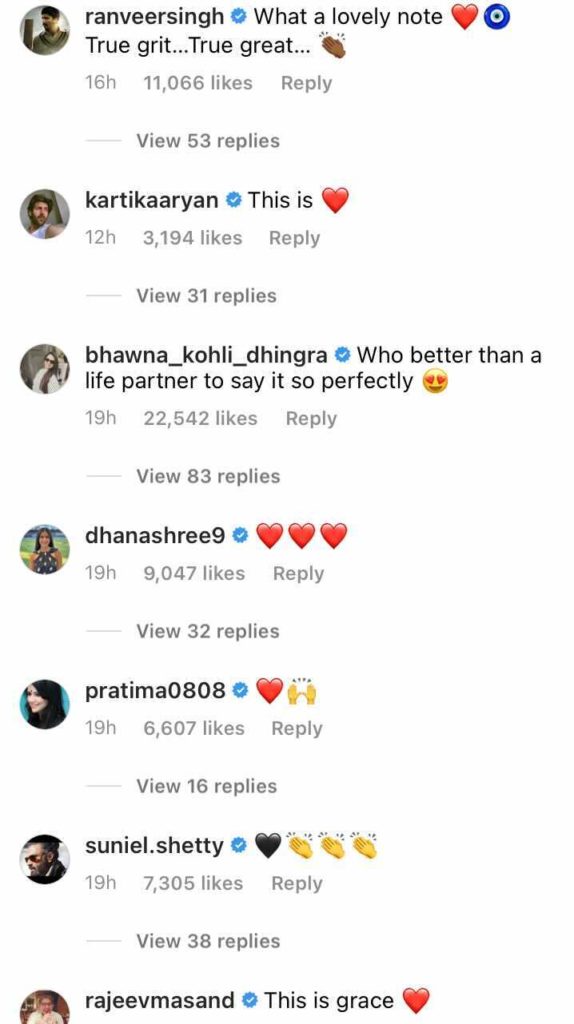 Virat Kohli took over as test captain of India in 2014 and had led the team in 68 matches with 40 wins. Thanks, skipper. You will be missed.