The ongoing war between Russia And Ukraine is getting depressing day by day. However, amid those distressing visuals from the war zone, a light-hearted clip is giving us respite from the suffering.

Ukraine’s Ambassador to Austria, Olexander Scherba, took to Twitter and shared a video of a farmer carrying away a Russian tank using his tractor. 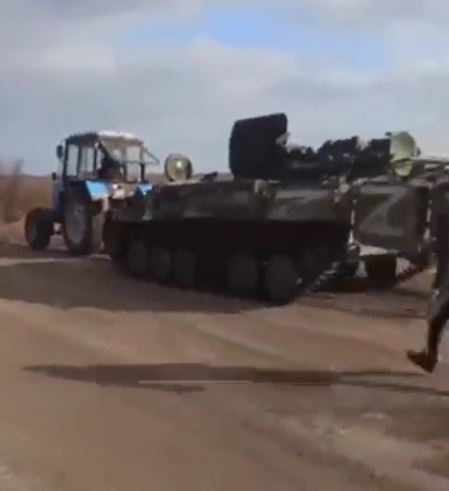 As impossible and bizarre it sounds, it did happen and this video is proof. And moments after the tractor from Ukraine stole a Russian tank, a man was seen running after it to probably get hold of the tractor driver and save themselves from the embarrassment.

If true, it’s probably the first tank ever stolen by a farmer… ))
Ukrainians are tough cookies indeed. #StandWithUkraine #russiagohome pic.twitter.com/TY0sigffaM

People online were ROFL on watching this visual.

A Ukrainian farmer using his tractor to "steal" a Russian tank is the funniest thing I've seen on the internet today. https://t.co/iEzwNttuIP

Glory to the tractor brigade 🚜 https://t.co/wsjnCeGWP9

I’ll take that thanks very much https://t.co/isxlRdoUFB

Dude, the Russians are getting bested by unarmed farmers. https://t.co/t7L2kvAcSf

If this is for real, it's incredible! https://t.co/aVetdbDhAz

This war has been a logistical mess from Russia.

There are several tanks just running out of fuel and soldiers completely cut off from supply lines – that’s why these tanks are being captured.

Ukrainians are doing all they can to fend for their country and we are proud of these fighters!