When two countries are fighting a war, there is no winner. Even if you win, you lose. Families lose their loved ones. Citizens lose their homes. Soldiers lose their lives. As Ukrainians continue to resist Russia’s military operations in the country, some remarkable stories of courage and grit are surfacing on the news.

1. A picture of a man went viral. He is approximately 80-years-old and is seen standing in line with just a bag, waiting to join the Ukrainian army. He said he’s doing it for his grandkids, reported India Today. 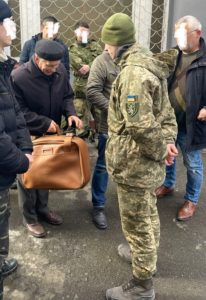 “Someone posted a photo of this 80-year-old who showed up to join the army, carrying with him a small case with 2 t-shirts, a pair of extra pants, a toothbrush and a few sandwiches for lunch. He said he was doing it for his grandkids,” a Twitter user wrote.

Someone posted a photo of this 80-year-old who showed up to join the army, carrying with him a small case with 2 t-shirts, a pair of extra pants, a toothbrush and a few sandwiches for lunch. He said he was doing it for his grandkids. pic.twitter.com/bemD24h6Ae

2. A Ukrainian soldier blew himself up to destroy a bridge to stop invading Russian tanks from marching ahead. According to NDTV, the incident occurred in the southern province of Kherson.

Vitaly Skakun Volodymyrovych, a Ukrainian soldier, blew himself up to destroy a bridge and stop Russian invasion forces storming in from Crimea. https://t.co/OyikCnA6yM pic.twitter.com/QBFXkjkky4

The soldier, Vitaly Skakun Volodymyrovych, is now being hailed as a hero by the Ukrainian army. According to the country’s military, he was deployed to the Henichesk bridge when the Russian tanks entered the area.

“The brave engineer had volunteered to rig the bridge, a key strategic point linking Crimea and mainland Ukraine, with mines. As the Russian forces raced towards him, the soldier realised he did not have enough time to set the fuse and get to safety. So, he blew himself up and destroyed the bridge,” NDTV reported.

3. An unarmed Ukrainian man tried to block a Russian military convoy. He stood in front of the Russian tanks and as the vehicles tried to swerve around him, the man moved to the side, blocking its way, reported The Guardian.

Here’s a look at the video:

4. Ukrainians are working to set up several initiatives that would help their soldiers fighting with the Russian army. One of the initiatives is blood donation. According to Al Jazeera, civilians lines up to donate blood to injured Ukrainian soldiers.

“There were so many people willing to give blood today that they are waiting their turn outside the hospital,” a Ukrainian civilian said.

Visuals showed hundreds of civilians lined up outside hospitals waiting to donate blood. Have a look:

#Ukraine Despite attacks and air raid sirens sounded in the Ukrainian capital, Kyiv, people are queuing up to donate blood.

Full solidarity with Ukraine. It is heartbreaking to see it attacked by the Kremlin. As a child, I used to spend summers in Ukraine with my grandparents pic.twitter.com/q1ovwibGXg

Today – In Cherkasy, residents lined up to donate their blood. #Ukrainians are always very caring. One of the reasons why I fell in love with #Ukraine. pic.twitter.com/odg9xDEPD6

We salute the Ukrainian spirit!