Video: Tiger Climbs A Tree Tries To Attack Monkey, Fails Miserably After It Tricks Him

The animal world is filled with fascinating scenarios where an encounter between 2 animals leads to a completely unexpected result. For instance, a stray dog had the last laugh as he fought a lioness in a fierce battle at a wildlife reserve. Even in fiction, how Jerry outsmarts its predator Tom every single time!

IFS Praveen Angusamy recently took to Twitter to share an undated video of a tiger trying to hunt a monkey. Being on top of the tree, the clever monkey manages to trick the tiger miserably into failure. Check it out:

In the video, we see the tiger in an attacking position as he jumps on top of some light branches of the medium-sized tree. The monkey is seen holding onto a branch below the tiger. As the tiger moves down slowly, the monkey seems to act like it’s falling or going down, pretending to flee. 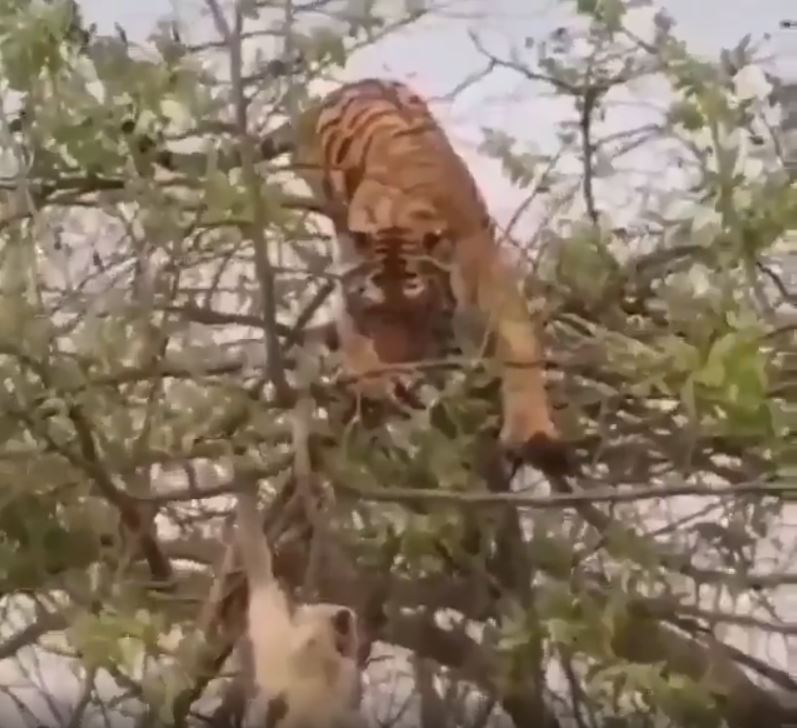 But since trees are the monkey’s turf, it sneakily swings up on top of the branches, while the tiger, not being a good climber, fell face down on the ground. What’s even more hilarious that the tiger seems to pretend as if nothing happened!

Here’s how people reacted to the amusing video:

Tiger after free fall be like — hey nothing was happened brother, I’m just chilling “kissi be Dekho tho Nahi h na 🙄😬😁”

2. The clever monkey giving a tough time to the tiger!

The monkey skillfully hatched a plan to escape the situation, while tricking the tiger into thinking that it can catch him. What do you think of this video? Tell us.