A couple of days ago, a UK cop was lauded online for delivering a food package himself after he arrested the delivery guy for breaking multiple laws. Apparently, cops across the world have multiple times set impressive examples of great policing.

Now, it’s this cop from Jabalpur, Madhya Pradesh who has been winning hearts online for showing compassion towards an injured woman. 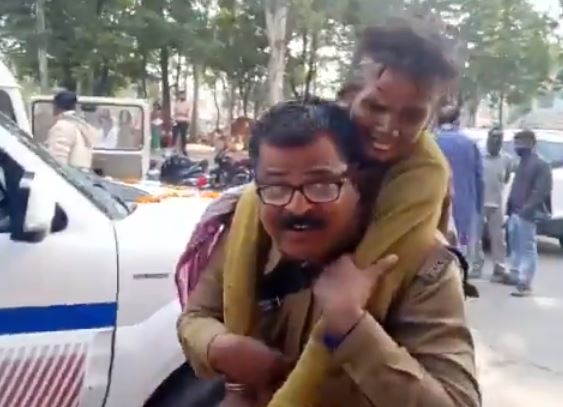 As reported by NDTV, a mini truck carrying daily wage workers overturned uncontrollably on Tuesday morning near Ghugri village on Chargava Road injuring 35 of them.

On hearing of the accident, the cops reached the spot and took the injured to a nearby hospital. However, there weren’t any stretchers available to transport the victims to the casualty ward. Aware of the seriousness of the injuries, the cops took charge and shouldered the injured workers inside the hospital. Among the noble cops who came forward to help was a 57-year-old ASI Santosh Sen.

Santosh cannot efficiently work with one of his hands after he was shot during an encounter with crooks. However, that didn’t stop him from carrying the workers on his shoulders to the hospital.

A video of his brave act has been circulating online.

Several people including the Chief Minister of Madhya Pradesh, Shivraj Singh Chouhan, lauded Santosh and the other policemen for their kind act.

These everyday, silent services of the police usually go unnoticed. Our salutes! https://t.co/D9LAjCeq2F

It is evident that he's brave, unfortunate to loose his hand but what a rare combination of Agility & Kindness. SSI Santosh Sen is born with a heart of Gold, a living inspiration for humanity, more power to you sir 🖖💪

Salute to this brave soldier.

A living inspiration for humanity ! https://t.co/LTzcOD223K

There was a time when people were terrified to take help from the cops due to their negative image in society. However, it’s people like Santosh, who through their noble acts, make us believe that they are truly our protectors. We salute you!