I have said this before and I will say it again, the reel life shapes and influences real life. Many of the films that we watch have glorified stalking and harassment and sold it to us as “love”. Think about films like ‘Raanjhanaa’, ‘Darr’, ‘Badrinath Ki Dulhaniya’, ‘Tera Naam’, etc. These films have promoted such problematic ideas about love and romance that something as dangerous as stalking has become equivalent to “love”.

It’s scary for women to go out on the streets and think about the possible ways in which they will experience stalking and sexual harassment. For example, an influencer named Lakshmi Devan took to LinkedIn to share a horrifying experience she had lately.

She wrote that during her solo trip to Goa, she was stalked and harassed by a person who refused to leave until she met them and accepted their gifts.

“On May 2, 2022 I was stalked and harassed while I was on my solo trip to Goa. The person somehow found out where I was staying. They then refused to leave until I met them and accepted the gifts they’d brought for me.”

This happened even after she didn’t share her location on social media. So imagine the amount of creepy stalking that had taken place to track her down.

“Mind you, I hadn’t shared my location anywhere on social media. Higher authorities had to be called and the matter was resolved, but for the next 5 days, I was too shaken up to leave my room. I barely slept. I triple-checked my doors and windows. I just ate take-out and cried myself to sleep.”

It doesn’t matter how ‘open’ one is about their lives on social media or what kind of pictures they post. Nothing justifies stalking.

“I was told that I shouldn’t have travelled alone since I’m a woman. I shouldn’t be ‘so open’ on LinkedIn. I was asked why my Instagram profile was public when it had pictures of me in a swimsuit?”

Her comment section was filled with people sharing similar experiences. Many stood in support of her and condemned such incidents. 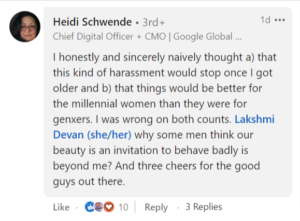 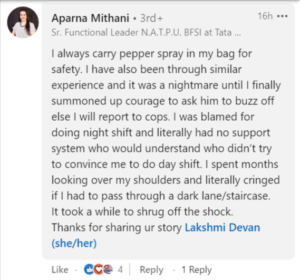 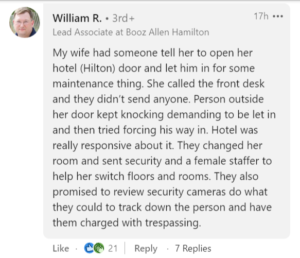 Are women ever safe?