The Hindi Film Industry for long has glorified incessant stalking and toxic relationship dynamics, selling it as “love”. There are several films which include a narrative where the hero chases (read: harasses) the heroine until she “falls in love” with him. Dhanush and Sonam Kapoor starrer ‘Raanjhanaa’ has been one of such films and despite being loved at the time, it has been inferred as being terribly problematic over the years.

Actor Abhay Deol recently took to Instagram to talk about ‘Raanjhanaa’ and its regressive plot-line.

Thinking back on the days when I was working. Can’t wait to be on a set again! #sigh #countingthedays #matteroftime #patience #covid19 #newnormal

“History will not look kindly at this film for its regressive message. It’s been a theme in Bollywood for decades, where a boy can (and should), pursue a girl until she relents. Only in cinema does she do that willfully. In reality, we have seen time and again that it leads to sexual violence of some sort. Glorifying it on-screen only leads to blaming the victim.”

“Jasjeet (played by Abhay) sits beside a man who stalked his girlfriend for so long, threatened to slit her wrist if she doesn’t reciprocate, sabotaged their wedding, got him almost killed, and he very conveniently puts the blame for all it on the lady he claims to love. What was Zoya’s (played by Sonam Kapoor) fault? Yes, she made a very silly plan of faking her boyfriend’s religion but didn’t Jasjeet agree to go along with it? Yes, she could have been more upfront about her refusal to Kundan, but when from the very beginning was he ever considerate or respectful to her consent?”

“How a person deals with a heartbreak speaks less of the person who couldn’t love them back or even how deeply they felt for that person and more about what that heartbroken individual is made up of. I think its time we stop blaming others for our personal failures and stop carrying the guilt of things people do to themselves.”

Such clear and valid insight from @oldschoolrebel9 regarding the film Raanjhana. History will not look kindly at this film for its regressive message. It’s been a theme in Bollywood for decades, where a boy can (and should), pursue a girl until she relents. Only in cinema does she do that willfully. In reality we have seen time and again that it leads to sexual violence of some sort. Glorifying it on screen only leads to blaming the victim, as @oldschoolrebel9 explains it so brilliantly. Please do take time out to read her observations in the pics above. #shedoesnotlikeyou #growup #gloryfyingsexualharrasment

People on the internet agreed with what he had to say. Many shared their own experiences of watching the film and talked about how it made them uncomfortable. Others accepted that we need to be more mature about the kind of content we create and consume. 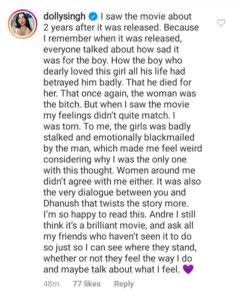 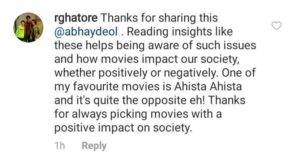 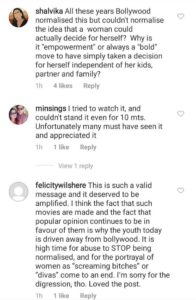 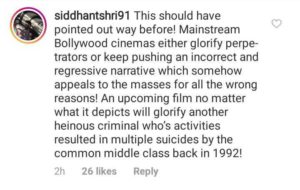 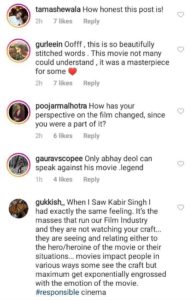 If a film like Raanjhanaa had been released today, I am sure that it wouldn’t have received the amount of support and love it did back in 2013. It would have been heavily criticised and that is a sign that we as an audience are moving towards a more progressive approach.