Indian Students Stuck In A Ukraine University Say There’s No Food & Water, Plead To Be Rescued

While evacuation operations to bring back stranded Indians from war-torn Ukraine are currently ongoing, there are still thousands of Indian students who are stuck amidst the bombing. The Russian-Ukraine war has left more than 600 Indian students seeking shelter at Sumy State University in north-eastern Ukraine. However, they are traumatized and are seeking help from the Indian government.

Videos of the students pleading to be evacuated from Ukraine have gone viral on social media. In one of the videos, the students claimed that there’s a lack of food, water and electricity at the Sumy State University and if they are not saved, they will all be killed. 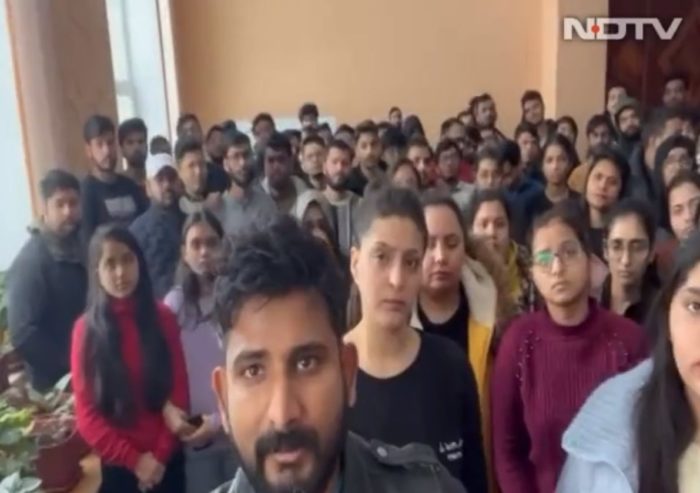 According to The Hindu, Viraj Walde, a student from Nagpur who is stuck at the university said, “More than 600 Indian students are stuck here in Sumy university. The embassy has neither evacuated us nor given any assurance to that effect. Since the last five days, there has been continuous firing, shelling and bombing in the city. The students are terrified and their mental state is deteriorating. Food and drinking water supplies are depleting. Even the banks and ATMs are running out of cash.”

Niranjana Santosh, a medical student from Thrissur alleged that the Indian Embassy remains unreachable. The Indian Express quoted her saying, “We have been calling several numbers listed on the Facebook page and checking updates from India, but there has been no response. Over the last eight days there has been bombing. There is no way we can step out. We are mentally traumatised. We just want to go home.”

"We will be killed if not EVACUATED soon"
: SOS from Indian Students at Sumy State University #UkraineRussianWarpic.twitter.com/qH0oS1JAc6

Some alleged that there is no electricity and water. One student said, “We may not die in the war zone but we may die due to scarcity of water and food.”

Indian students in hostel no. 1 of Sumy State University say they have run out of water after the air strikes on March 3 evening, which was also when they lost electric power supply.#SumyStudents #IndiansInUkraine @IndiainUkraine @opganga pic.twitter.com/aKqN9E7GxN

In another video, students of the university were seen filling ice from outdoors in buckets for allegedly melting it down to water so they could drink it.

Students in Sumy have started filling buckets/bottles with snow to melt and drink. Yesterday water station was bombarded by Russian forces cutting all water supplies.

We hope these students are able to come back home soon!