We know relationships can be tricky. Even though we love our partners to the moon and back, insecurities and jealously never leave us alone. And believe us, furious lovers are the worst to meddle with in such situations.

Well, like the angry wife who climbed the car roof when her husband ignored her, or the woman who hit her boyfriend with a laptop for looking at other women; this Flordia man went a step ahead and tried to bury his girlfriend by dumping soil on her car.

Hunter Mills, a 20-year-old furious lover from Florida downed a huge mound of soil over a car with his girlfriend inside it, using a tractor. Mills did the unexpected in the fit of rage when his girlfriend showed up at the dirt pit where Mills worked, driving someone else’s car. 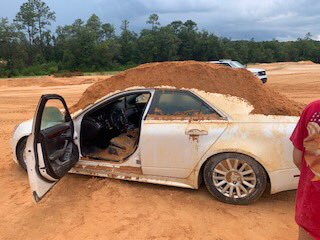 Reportedly, his girlfriend was there to talk to him after a fight but what she did wrong here was to drive down to him in someone else’s car and refuse to answer a question.

The angry young man then dumped a large bucket full of dirt on the car with his girlfriend inside it using a front-end loader. 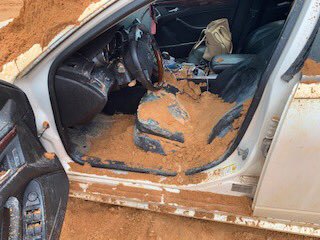 The Okaloosa Sheriff later shared the pictures of the car and wrote, “Hunter Mills of Crestview wanted to talk to his girlfriend – but when she showed up in someone else’s car and wouldn’t answer a question, he used a front end loader to dump dirt on the 2010 Cadillac. Her window was down. He’s charged with #felony criminal mischief.”

He deserves to be charged, so immature, grow up!

Ohhh 😱 That really was a quick thinking 😖

Well… that's one way to end a relationship. 🤣🤣🤣

So did she watch him walk over to a front end loader, start it up, get a load of dirt, and drive that thing that might go 10mph over to the car she came in, then dump said load of dirt on it instead of just getting back in it and driving away?

Yeah, it's 100% her fault for not preventing his actions.

Although the woman escaped unhurt despite being inside the vehicle, the Sheriff informed that Mills was charged with felony criminal mischief.

While such incidents do give us our daily dose of laughter at times, it should always be safety first! We are so done with furious partners lashing out in risky ways! Aren’t you?