Angry Wife Climbs On Car Roof When Husband Ignores Her After A Fight, Watch Video

If you thought that Pakistani citizens venting their rage after losing a match to India is the ugliest and funniest thing you have ever witnessed, have you ever seen a couple fighting in public?

In this case, it is always hard to decide who was at fault and who should make the first move to resolve the issue. But things can take an ugly turn if you ignore your spouse after a heated argument.

In central China’s Hunan province, an angry wife climbed onto the roof of a car in the middle of the road after arguing with her husband sitting inside the vehicle.

A CCTV footage revealed a woman standing on the top of a car and repeatedly stamping on the roof in broad daylight, blocking traffic.

According to reports, the wife had an argument with her husband while he was driving, but the man ignored her. Hence, the infuriated woman got out of the vehicle and climbed onto the car roof. She stayed atop and kept stomping for four minutes as other cars drove around them even after the traffic lights turned green. After the local police saw the surveillance video, they called the car driver to the police station for an investigation.

Reportedly, the husband was imposed with a fine for driving without a license, while the wife was set free with a warning. 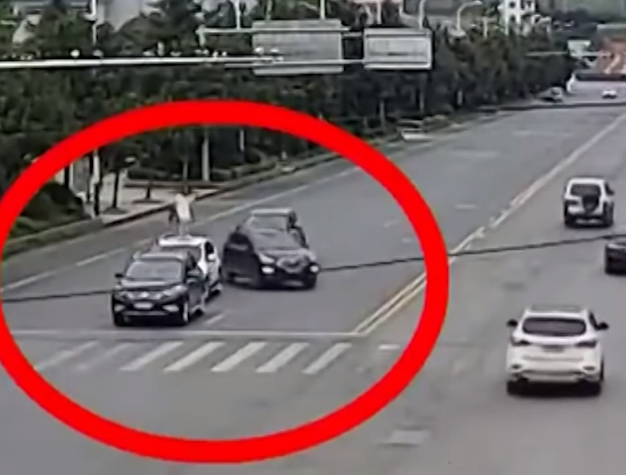 Anger management is a quality not all can master, but how sensible it is to risk one’s life over a petty argument with your spouse?? Tell us.