Do you know what’s worse than missing a flight you booked last minute? An angry partner, we would say. And when they are pissed at you for cheating on them, you better count your blessings.

A man was taken to task by her possessive girlfriend who accused him of ‘looking at another woman’. The jealous woman couldn’t take his man eyeing at another woman on the flight they were travelling and decided to out her rage at him.

A verbal spat between them soon turned ugly and the girlfriend thrashed the man with a laptop in the sight of a plane full of passengers.

The entire incident was captured and took only a few moments to go viral:

Reportedly, the incident took place on an American Airlines flight from Miami to Los Angeles. The woman was seen yelling at her boyfriend for a couple of minutes in a fully boarded plane before he decided to move out of his seat saying, “You’re assaulting me.”

She then chased him down the aisle and smashed the laptop on her boyfriend’s head. The woman was too enraged to listen to any of the air hostesses who tried to calm her down. 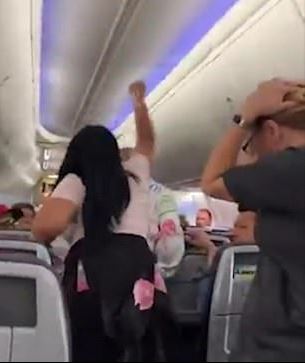 The co-passengers were equally terrified to see this ugly sight and screamed in horror when the boyfriend was hit by her. The woman was informed that she can be charged with physical assault but little did she care.

Eventually, the couple were deboarded from the aircraft to ensure that the other passengers have a peaceful and comfortable flight.

The video was shared on Twitter from different angles by people boarded on the same flight:

hot girl summer has been postponed until further notice pic.twitter.com/FpxR61NA7G

Ya I was 2 seats away gotta a couple different video angles pretty crazy huh ???
Captain- Mam your gonna be charged with ASSAULT
Hulk Vita – Fine whatever ! pic.twitter.com/Wa3mgvJ8zK

It missed his head and hit the stewardess and myself in the face pic.twitter.com/3wEpbiNYGc

yes she hulk smashed a dell computer on his head

Lmao, they bout to start banning people from taking laptops on the flight….always has to be one person that spoils it for everyone else…smh.

Whenever you find someone special in life hold on to her… at least until the police arrive.

She must be too frustrated to realise they were causing inconvenience to other co-passengers.