Dad Tapes Tablet To His Face With Wife’s Pic On It To Feed His Wailing Baby, Watch Video

Ask a parent and they’ll tell you how exhausting it can be to take care of a baby. The continuous sleepless nights and practically no time to live their life as earlier often takes a toll on them. Hence, parents keep coming up with bizarre yet impressive parenting hacks to ease the stress.

This father from China also came up with a trick to feed his wailing child in the absence of his mom, reported News18. Making effective use of technology, the dad from Wuyuan County of Jiangxi province opened a picture of the kid’s mommy on his tablet and strapped the device to his face using a transparent tape. 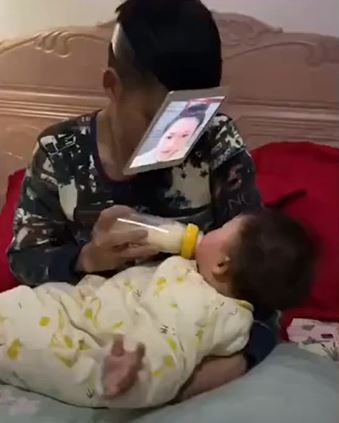 In a video that has gone viral online, the child can be seen peacefully feeding with the bottle while playing with her mom’s picture on the tablet.

Clearly, the trick has worked in favor of the dad as the child believes that it’s actually her mom feeding her. Earlier, a mom placed life-size cutouts of herself around her baby in her absence to calm him. Soon after, a sleep-deprived father tricked his kids by drawing a picture of himself while he took a nap.

Well, these are some foolproof tricks that new parents can surely try in case of an emergency. What say?