From a bride taking a metro to avoid traffic and flat brokers rejecting people, there are some things that can happen only in Bengaluru. And if you think you have seen enough of the weird and unexpected things that happen in the silicon valley of India, then you’re in for a shocker.

We just found out a man who made ‘it’s raining money’ a reality.

Taking to Twitter, a man named Rakesh Prakash shared two visuals that got us scratching our heads. The first visual shows a well-dressed guy, with a bag full of money rushing to the edge of a flyover and then throwing a handful of cash from the flyover. 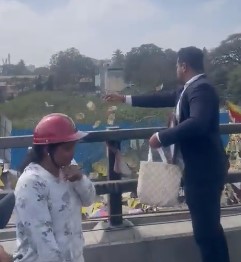 As weird as his act of throwing Rs 10 notes from the flyover is, he is also seen wearing a huge wall clock as a necklace. 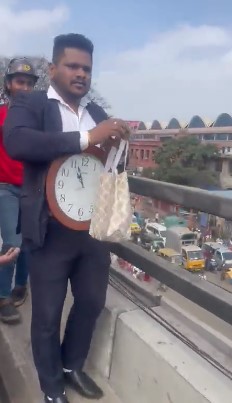 Watch him in action here:

In the second clip, we can see people under the flyover rushing to the spot to collect the free cash. This caused chaos under the Sirsi Circle flyover near the KR market area.

#Bizarre in #Bengaluru#Traffic came to halt on #Sirsi Circle #flyover and the road below it (#KRMarket) after a well-dressed youth went about throwing currency notes. Who was he and why did he do it is not known. @NammaBengaluroo @WFRising @TOIBengaluru @peakbengaluru pic.twitter.com/zXB6mndKm6

According to a report by Hindustan Times, the man is identified as 30-year-old Arun. His LinkedIn profile describes him as an event manager, Kannada motivational speaker, and business coach.

He was apparently throwing money as a publicity stunt. After he came in a scooter to the prominent wholesale market and caused a traffic jam, the cops issued a notice to him for creating chaos and a public nuisance. 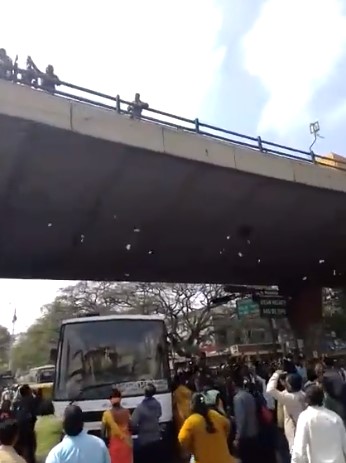 “During the inquiry, we found that he did it for promotion and publicity as he is an anchor and an event manager. He, along with his friend Satish, arrived this morning at the flyover and threw the money. He chose the location since it was a crowded place. The videos were also shared by him on Facebook, Instagram, and WhatsApp,” said deputy commissioner of police (DCP), Bengaluru West, Laxman Nimbargi.

After being held accountable for his actions, Arun quickly apologized and said he had his reasons for throwing money in the air and that he will elaborate at the right time.

“I apologize for causing the traffic jam but my intentions for right. Give me some time. I will explain why I did that.”

Twitter was bamboozled on seeing him pull off this stunt. This is how people reacted:

Did someone give him wrong information about another demonetization? https://t.co/4QSkFhlFsb

I knew Bengaluru traffic was bad, but will throwing money at the problem solve it ? 🤣😳 https://t.co/fn9GWYfFLR

It happens only in #Bangalore . https://t.co/sIG8gJbXvP

Looks like this man wanted to feature in a GIF like this..
But looks idiotic to attempt this in realty. https://t.co/4tbB4aWpeW pic.twitter.com/tizUopknDk

Have we become so rich?
Wtf… https://t.co/fqEy9YWTgR

It’s raining here in @bengaluru where is the next? https://t.co/h9ut69aBKs

Every time we think this is the peak Bengaluru moment, someone comes and bursts that bubble. This city never ceases to amaze us.