Shah Rukh Khan fans have been eagerly waiting for the release of his movie ‘Pathaan’ which will mark his return to the big screen after a brief hiatus. However, after the makers dropped its song ‘Besharam Rang’, it sparked controversy online with people boycotting the movie and wanting to ban it.

Soon, hashtags like #BoycottPathaan and #BoycottBollywood started trending on Twitter. Despite all the backlash, SRK fans haven’t stopped loving the film.

#Pathaan won't be released in my country , IRAN , but I’m sending you all my best wishes with lots of LOVE . @iamsrk 🫶🏻♥️🇮🇷🇮🇳 pic.twitter.com/QGEbb5r7kr

A man on Facebook also intended to support the boycott, however, the typographical error he made while commenting on a post tickled many funny bones online.

Taking to Twitter, an activist named Fatima Khan shared a screengrab of the post wherein the man had boycotted the Indian city of Patna instead of the movie ‘Pathaan’. 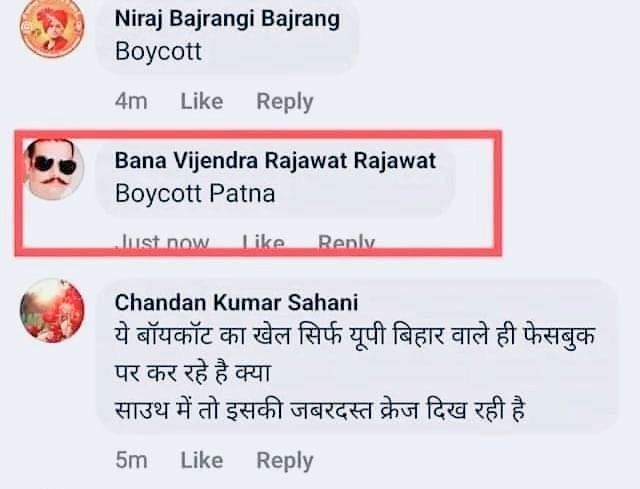 Sharing the screenshot of the person’s comment, Khan wrote in Hindi, “Uncle, you please leave it. You have criticized the city Patna instead of Pathaan.”

People online were giggling on seeing the post. This is how they reacted:

Lol…
Every publicity is good whether good or Bad!!!#Pathan @shahrukh_35 https://t.co/sNfY9bGN0Q

I was reminded of those paid activists who join a protest just to increase the numbers and have no idea why they’re protesting when asked. Get a life, uncleji!