19-YO Assam Girl Wore Shorts To Exam Hall, Made To Cover Herself In Curtain, Sparks Debate

There are different societal standards when it comes to men and women. Things that often go unnoticed in the case of a guy are met with glaring stares and moral policing in the case of a girl. Take for example something as basic as wearing shorts – if a guy would have worn a pair of shorts to take an exam, he most likely would not have been questioned.

However, when a girl in Assam showed up in a pair of shorts to take an exam, she was made to sit for the exam wrapped in a curtain. The girl revealed that there was no particular dress code mentioned in the admit card or anywhere else.

According to Indian Express, 19-year-old Jublee Tamuli travelled 70 kilometres to take an exam in Tezpur. The exam was that of Assam Agricultural University. She revealed that there was no problem while entering the venue. The guards had allowed her inside.

However, once she entered the examination hall, the invigilator said he wouldn’t allow her to take the exam if she is wearing shorts. The incident took place in Girijananda Chowdhury Institute of Pharmaceutical Science, Tezpur.

“A few days ago, I appeared for the NEET exam in the same town, wearing the exact same attire – nothing happened. Neither does the AAU have any rules about shorts, nor was there anything mentioned in the admit card. How was I to know?” 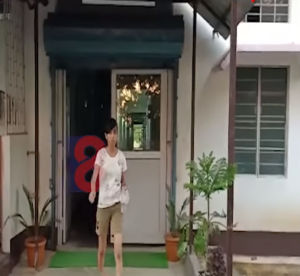 She went on to add how the Controller of Exams suggested her father buy a pair of trousers for her from a nearby market.

“I went crying to my father who was waiting outside. Finally, the Controller of Exams said I could take the exam if a pair of pants could be arranged. So my father rushed to the market to buy a pair.”

Jublee’s father did manage to buy a pair of trousers from a market 8 kilometres away. However, when he returned, he was told that the problem was resolved. Jublee was made to wrap a curtain around her legs.

“They said that if I lacked basic common sense, how would I succeed in life. They did not check for Covid protocols, masks or even temperature…but they checked for shorts.”

Calling the entire incident the “most humiliating” day of her life, Jublee further said, “If a boy wears a vest, no one says anything. Some men go around bare-bodied in public, and no one says a thing. But if a girl wears a pair of shorts, then people point fingers.”

The girl did manage to complete her exam but she expressed that the episode was “stressful”.

Have a look at her interview here:

While there were some people who supported the young girl, there were many others who highlighted that even though one has the freedom to wear whatever they are comfortable in, one must maintain a certain level of decorum in institutes. 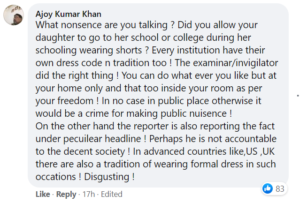