After the sad demise of former Tata Sons chairman Cyrus Mistry in a road accident, a lot of conversations have kickstarted around road safety in India and the usage of seatbelts.

The Ministry of Road Transport and Highways also recently roped in Bollywood actor Akshay Kumar to feature in an advertisement promoting road safety in India. 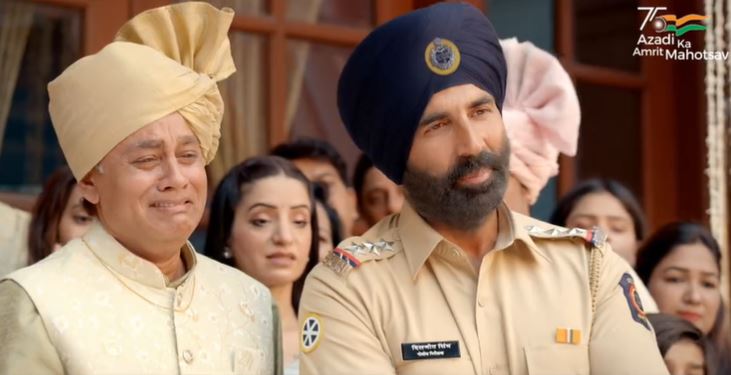 In the ad that was recently tweeted by the current Minister for Road Transport & Highways, Nitin Gadkari, Kumar is seen dressed as a cop reprimanding the father of a bride who is giving a teary send-off to his daughter post her wedding.

This is when Kumar interrupts him saying, “Arey airbags to sirf 2 haina. 6 kyun nahi?” He then goes on to explain that during an accident, only the airbags in the front would open leaving the passengers sitting behind (in this case, the bride and the groom) prone to a deadly accident.

Following his explanation, they get done with the old car and a new car with 6 airbags immediately comes for the newly wedded couple.

Many people thought that the bride’s father sending the couple off in a better and more secure car indirectly suggested dowry and hence, the advertisement was met with a lot of criticism online.

This is such a problematic advertisement. Who passes such creatives? Is the government spending money to promote the safety aspect of a car or promoting the evil& criminal act of dowry through this ad? https://t.co/0QxlQcjFNI

1. Disgusting to see Indian govt officially promoting dowry. What even???

2. Cyrus Mistry died because the road design was faulty. That spot is an accident-prone area.

Is this an Ad for dowry?
Tax payers money used for promoting dowry https://t.co/mhHtNVckyg

Government for the Rich

Same Akshay Kumar did a movie recently to spread awareness against dowry. What a joke. https://t.co/1oYiMdfEPb

Why would u pass n promote the evil practice, a punishable offence in the country of dowry, Just for promoting six airbags in cars.
Why would u do that.??@akshaykumar why do u contradict urself always. Just a month back u did raksha bandhan that spoke of dowry n now this?? https://t.co/tjXGIu6itS

Amazingly G.O.I and our NRI celebrity promoting DOWRY and then this leads to Legal Terrorism.

They only want Men to suffer and run away from Accountability of Fixing Roads..#BoycottMarriage @NyayPrayaas https://t.co/VpveWAi0YH

Why the hell marriage expenses are always on the girl's family?

Why does this 'Bidai' should be sent in the car by the girl's family?

At the time of inflation minister should be promoting simple marriages and special marriages.. not fatty weddings with dowry and exploitation. https://t.co/LgSBtGGC61

So the govt of India chooses to normalize dowry in their ad for road safety. Slow clap!! https://t.co/gFjPUxPVRo

This ad promotes dowry; should be removed and banned immediately! @MinistryWCD @Twitter https://t.co/IuhhN9jVGF

So it is Dowry’s ad right and Govt itself is promoting it … good https://t.co/vZd9wjAOxH

Giving or taking a car for dowry?
Always count the airbags first. https://t.co/JTUToHNF6n

Why tax payers money is being used for promoting dowry ⁦@nitin_gadkari⁩ ?Who passed this script & this creative.this is pits 🤦🏻‍♀️It has taken so many years for ppl to not ask for dowery,yet it lives in our society & now you are promoting it #facepalm https://t.co/Xl3D5U1lSc

Propagating dowry in the name of spreading awareness about safety. Someone or a group of people thought this, pitched it, got accepted, got actors to agree to be a part of it, shot the video, got final edit, aired it. Did anyone object and were they heard? Strangely, no. https://t.co/d7T6kupaWx

What a sorry excuse! Glorifying dowry in the guise of safety awareness!

Not to mention majority of Indian cars have Zero NCAP rating – meaning they'll crumble like pappad on the roads, but now they come with 6 airbags.
So you can now crumble in comfort https://t.co/sPJxIxWhWQ

What an ingenious way to promote dowry. All you guys out there, make sure there are enough air bags when you are demanding an expensive car from your in laws 🥰 https://t.co/9JfVdUZvNO

Do you all see the problem with this ad? 🤦‍♀️🤦‍♀️🤦‍♀️
Did no one point out the obvious https://t.co/FoV7AWrzbi

What rubbish is this?
Glorifying the evil practice of Dowry https://t.co/tv1w0XXASw

Having said that, some said that people also rent vehicles for the bidai ceremony and this isn’t promoting dowry directly. What do you think?