Thankfully, Shasvathi Siva chose her independence over an unhappy marriage and even after 4 years of divorce, she celebrates her separation from her husband.

Shasvathi took to LinkedIn to share that she celebrates the day of her divorce every year to acknowledge her freedom and what the past four years have been like, all that she has lost and achieved.

“4 years ago, I got divorced. I celebrate this day every year as my day of freedom and it’s really important to me that I acknowledge it every year. Not a day has gone by without feeling immense gratitude for life every day.”

She went on to list the many achievements and a significant failure that happened in the past couple of years. It looks like her milestones are a bigger list than her losses.

From starting support groups to becoming a TEDx speaker, from moving from Mumbai to Bangalore to being an author, life turned a full 360 degrees for her.

“I’ve conducted over 75 support group video and in-person sessions, and currently running a Telegram support group of 500+ participants, actively benefitting from the space.  I had the privilege to be a TEDx speaker, tied up with multiple brands for collaborations, spoke on 10+ podcasts, shot videos, and got featured on multiple media outlets. I shifted cities from Bombay to Bangalore and set up a beautiful house that gave me so much happiness abundantly.  I’m an author-in-the-making with Penguin Random House India for my first book titled ‘Divorce Is Normal’,” she wrote.

From a bleak and uncertain past, she now has a life she is grateful for. She has learnt to live alone and enjoy her own company. Have a look at her post here:

Several people took to the comments section to shower immense love and support on Shasvathi. They called her an inspiration and a champion. Have a look: 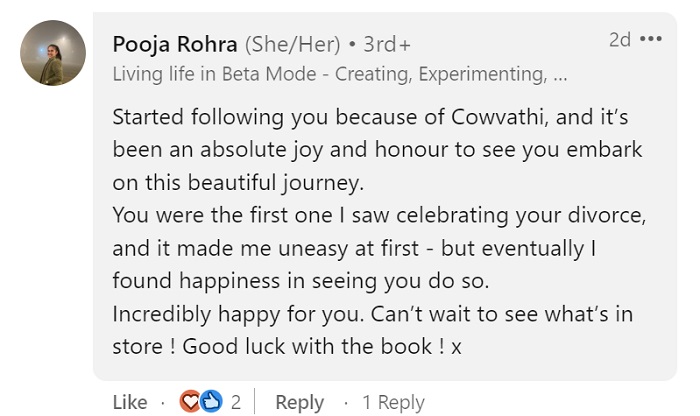