Samantha Akkineni Slams Rumours Of Her Having Affairs, Not Wanting Kids, Issues Statement

A few days ago, Samantha Akkineni (now Samantha Ruth Prabhu) and Naga Chaitanya announced their divorce. Post their announcements, there were several news articles that surfaced speculating the reasons behind their separation. while the couple didn’t reveal the cause behind their divorce, tabloids suggested that Samantha didn’t want kids, that the two had intimacy issues, domestic issues, etc.

However, Samantha Akkineni took to social media to address these rumours. She claimed that people have been saying that she had “affairs” and was an “opportunist”.

“Your emotional investment into a personal crisis has overwhelmed me. Thank you all for showing deep empathy, concern and for defending me against false rumours and stories that are being spread. They say I had affairs, never wanted children, that I am an opportunist and now that I have had abortions.”

She expressed how a divorce, in general, is painful for a couple to go through and that she is being attacked relentlessly.

“A divorce in itself is an extremely painful process. Let alone allowing me the time to heal. This attack on me personally, has been relentless. But I promise you this, I will never allow this or anything else they say, break me.” 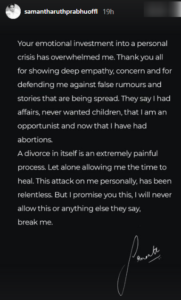 More power to you Samantha! We wish you strength in these tough times.