Celebrated actors Samantha Akkineni and Naga Chaitanya recently ended their four-year marriage and announced their separation on social media. The couple didn’t place blame on anyone for the divorce. However, other celebs took to social media to rant about the unfortunate split.

Ram Gopal Varma went on a Twitter rant about how marriages are made in hell and divorce is made in heaven. He said that matrimony is short-lived and equated marriage to the British rule and divorce to gaining independence.

Most marriages don’t last more than even the no. of days they celebrate the event ,and so real Sangeeth should happen at a DIVORCE event where all divorced men and women can sing and dance

DIVORCE should be more celebrated than MARRIAGE because in marriage , u don’t know what u are getting into, whereas in divorce u are getting out of what u have gotten into💐 https://t.co/87HKdcAQ6L via @YouTube

Actor Kangana Ranaut had other ideas and she criticized the ‘Bollywood divorce expert’ over the high-profile split. Her IG story said that divorce is always a man’s fault and she went on to blame the divorce on the ‘south actor’ who has been in touch with ‘Bollywood’s divorce expert’. 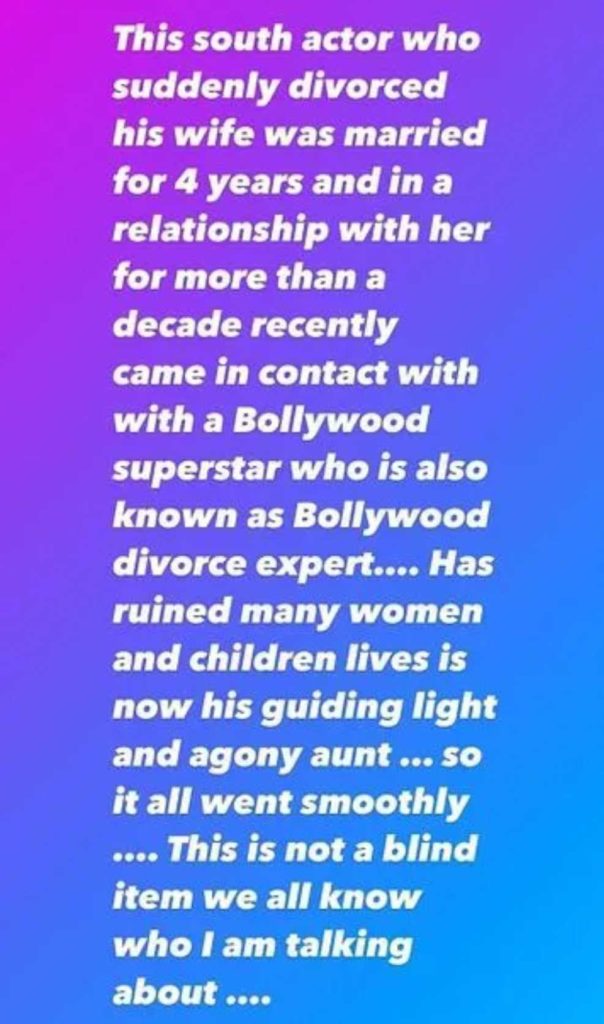 She concluded by saying that everyone knew who she was talking about.

What do you think of Kangana’s speculation? Tell us.