We are standing on the precipice of a phenomenal change brought about by the #MeToo and #TimesUp movements. They have been late in their coming to India. But now that they’re here, it is up to us to not let the burning fires extinguish.

In the past month alone, several prominent personalities have been accused of sexual misconduct, even rape. 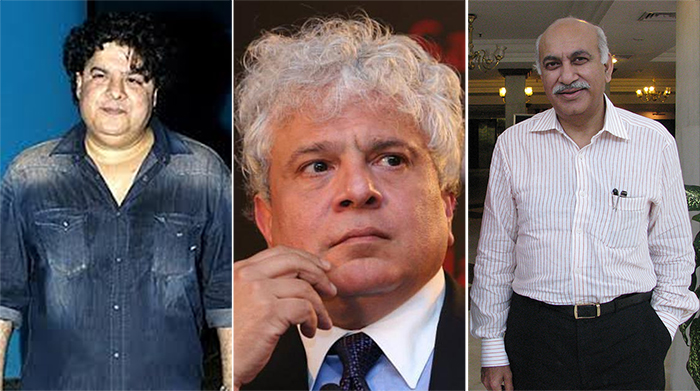 These are politicians, film industry giants, musicians, comedians, journalists, writers, media personalities and corporate players. Many of them have apologised, and yet many more of them have chosen to issue ridiculous justifications or vehement denials. Some of them have had to step down from their positions of power, while others are in hiding, waiting for the tales of their misdeeds to fade from public memory so they can emerge again.

Tennis ace Mahesh Bhupathi seems to be asking the same questions to the industry and the people. But then, he also has an answer for these questions.

In a powerful note shared on Twitter, Mahesh Bhupathi, father to six-year-old girl, speaks up about taking a stand to #StopEngaging with “serial predators” who have been named in the recent #MeToo allegations.

#stopengaging . Everyone seems to be horrified about the #metoo stories but why is no one saying anything?#useyourvoice #timesup #CleanUp pic.twitter.com/FGOukZLyuF

Bhupathi, who is also married to actress Lara Dutta, talks about how his wife refused a work assignment because it came to her through the casting company of Mukesh Chhabra, who is also accused of sexual harassment by two women.

In the note, Bhupathi mentions that while his wife has chosen to take a stand, there are several prominent industry influences who continue to remain silent about the accusations against men like Sajid Khan (with whom Lara worked in Housefull), Suhel Seth and so on.

“People in the know tell me the reason for this is, ‘Everyone has skeletons in their closet’. I don’t buy that.”

Speaking about what prompted him to finally break his silence and take a stand, Bhupathi writes,

“Last night, a friend from the talent industry told me everyone is waiting for a month or so for matters to die down and then it will be business as usual. That’s when I decided that I may not have any influence but I do need to say something.”

Mahesh Bhupathi has but one appeal to everyone who is in anyway associated with the alleged predators—Stop engaging with them. He admits to knowing most of these men, and promised that the association ends now.

You can read the full note here: 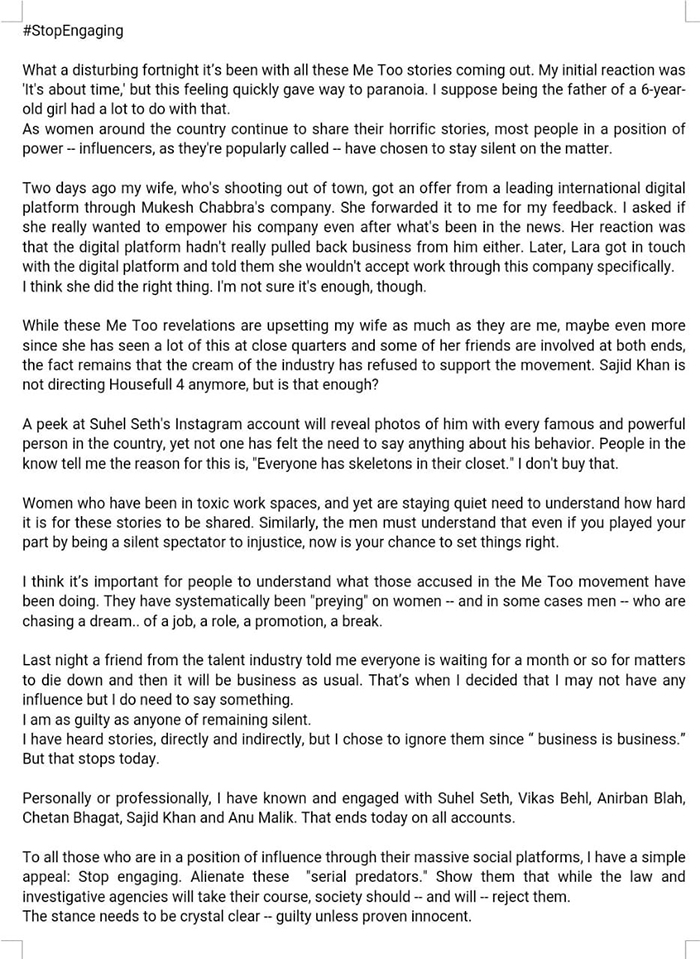 “The stance needs to be crystal clear—guilty unless proven innocent.”

The statment made by Mahesh Bhupathi, and which seems to have his wife Lara Dutta’s approval, is a rather bold one. And there are many who have praised the man for taking a stand, and have pledged to do so themselves.

Actress Dia Mirza has also supported the statement, calling it the only way for things to truly change.

I feel so proud to call you a friend @Maheshbhupathi. This is how things will truly change. #StopEngaging #TimesUp #MeToo #CleanUp #UseYourVoice https://t.co/N4QX6lDMJT

People need to keep their personal and professional relationships aside and support the survivors who come out and speak up.

This is a really brave statement @Maheshbhupathi . Thank you. That's exactly it. I too have professionally and socially known some of the men on this #MeToo list & when I called them out by name- others in the media who are still silent – asked why. If we don't we are complicit https://t.co/xEULbeA5mW

Mahesh Bhupathi is walking the talk.

This is so heartening. Thank you, @Maheshbhupathi, for walking the talk. https://t.co/XPypXbrsHt

A basic and realistic step that everyone should be taking right now.

Might not be a 'viral' step but surely a very basic and realistic one. If everybody does their part, it would be enough #MeToo #StopEngaging https://t.co/xfgXQK4yn7

Bhupathi, with his associations to sports and Bollywood, is indeed in an important position to make such a bold statement. And we’re glad he has made it.

We have been complicit in our silence for too long now.

Can more men speak up the way @Maheshbhupathi has? This is not a women vs men movement. It's a movement towards creating a safe, empowering culture for every single one of us, and for our future generations. We have been complicit in our silence for too long. Let's SPEAK UP now. https://t.co/0sa9CEaKU8

As Diandra Soares points out, we need to do this to protect the future of our children.

Thank you @Maheshbhupathi 🤗
The BRAVEHEARTS FIGHTING & coming out with our truths , are doing it for that beautiful baby girl of yours too… so the future is SAFE. We don't have to grow up harsh & always fight& bite & watch our backs from predators everywhere. #metoo https://t.co/owEHUVlYX7

#MeToo shouldn’t be met with fear and skepticism, considering the staggering statistics that will tell you that crimes against women are more rampant and frequent than you can imagine. So the likelihood that a woman is telling the truth about being harassed or raped is too damn high to ignore.

Mahesh Bhupathi’s plea to #StopEngaging puts the onus not just on women or men, but on everyone. The law believes in “innocent until proven guilty”. But considering that so many predators have exploited this rule and gotten away with committing crimes for eons now, can we for once #BelieveTheSurvivors?