Men dating or getting married to much younger women has been normalized to the extent that the other way round is unfathomable. Remember when Priyanka Chopra received a lot of criticism for getting married to Nick Jonas? It’s almost as if there is an unwritten rule that women who are older in age, are more financially stable, and more successful have to marry men of equal status.

However, Katrina Kaif shattered this stereotype. She is 38 years old, runs a successful business, has several blockbuster hits to her name, and is a big name in the Hindi Film Industry. Vicky Kaushal, on the other hand, is 33 and only a couple of films old. Katrina Kaif tying the knot with Vicky Kaushal has managed to raise a few eyebrows, but many loved her for paving her own path.

Kangana Ranaut too took to Instagram to share a message on boss women dating and getting married to comparatively less successful men. The timing was perfect as it was just before Vic-Kat were set to tie the knot, reports Hindustan Times.

“Growing up, we heard many stories of successful rich men marrying much younger women. For women to be more successful than their husbands were seen as a major crisis, forget marrying a younger man after a certain age, marriage was impossible for women. Nice to see rich and successful women, leading ladies of the Indian film industry breaking the sexist norms. Kudos to men and women both for redefining gender stereotype,” she wrote. 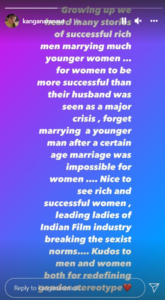 It is indeed great to see women tread against the norm and take the wheels of their own life!