We are often taught to offer our bus or metro seats to the elderly, pregnant women, and anybody with a physical disability. It is basic decency to use your privilege, in this case physical ability, to help those who are less able.

However, one guy took to Reddit to narrate an incident where he refused to offer his bus seat to a “heavily pregnant” woman as he had sore feet from working all day.

“At my job, I’m literally on my feet all day, and I work 10-hour shifts. After a long day, my feet are sore…I have to walk another 15-20 minutes to my house from the bus stop. Which means more time on my feet.”

One day, a “heavily pregnant” lady got on the bus and stood next to him. With no other seats available, she tried hinting at him to give her his seat. However, the guy pretended not to see her. When she asked him aloud, he said no.

“I wasn’t rude or anything, I just told her no, I’ve had a long day and my feet are sore. I don’t want to give up my seat. She started crying about how she’s a pregnant single mom, and I told her I’m sorry, but that was her personal choice and she can’t expect other people to accommodate her life choices. We live in a state where birth control and abortions are free, so I don’t know why this should be my problem. It’s not my fault she decided to have a baby when she can’t afford a car.”

Later, an old man offered his seat to the woman. However, they called him names but the guy ignored them. But when he got home and narrated the incident to his sister, she flipped out.

“When I got home and told my sister, she flipped the fuck out and went crying to our parents, who also chewed my ass out. But I was tired and had a long day, and I don’t know why we need to keep perpetuating the idea that breeding somehow means your entitled to people’s seats. I’m tired, too, we’re all tired in this pandemic.”

While there were some who argued that the woman could have asked someone else for a seat when he said no, a majority of people online taught the guy a lesson on empathy. Many informed him how pregnant women are more prone to accidents due to a lack of balance. Have a look: 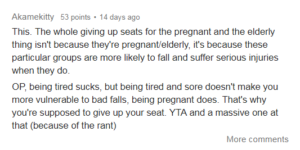 To use your privilege to help someone else, even at the cost of a little discomfort, is never a bad idea. We must learn how to be kinder to one another because if we don’t, who will?