Bihar: Vet Goes To Check Farm Animal That Was Sick, Gets Kidnapped & Forced To Marry

Back in the day, you must have heard stories of women forcefully being married to a stranger in India. They would be presented at the mandap and married to the groom she never met or saw even once.

Well, tides have turned. Today, grooms are being forced to tie the knot with brides that too, at gunpoint.

Groom kidnapping or ‘Pakadwa Vivah’ wherein bachelors are abducted and married to women at gunpoint is still a common practice in parts of Bihar, Jharkhand, and Uttar Pradesh. And recently, a veterinary doctor from Bihar’s Begusarai district became a victim of it, reported News18.

The veterinary doctor Satyam Kumar Jha was kidnapped by three men when he was called in to check on a sick animal. He was then forcibly married to a girl.

Bihar | A veterinarian was abducted and forcibly married in Begusarai

"He was called around 12pm to check on a sick animal, after which 3 people kidnapped him. Everyone in the house was worried after which we went to the police.” said a relative of the victim (14.06) pic.twitter.com/OYA1lQWoBi

“When Satyam did not return home till the evening, we started searching for him. He didn’t even return in the night. On Tuesday morning, a video clip came on my cell phone. When we opened the clip my son was sitting with a girl and the marriage was underway,” said Subodh Kumar Jha, father of Satyam. 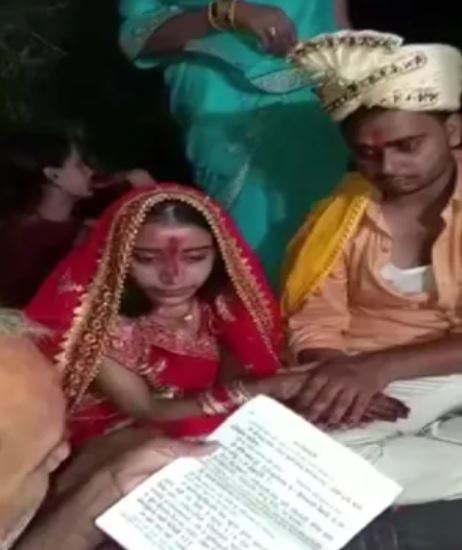 The family then filed a written complaint against the accused, in the Teghra police station.

“We have received a complaint related to Pakadwa marriage (kidnapping for marriage). The investigation is underway with all angles. The case of love affairs cannot be ruled out,” said the SHO of Teghra police station.

The Father of the boy (veterinarian) had given a written complaint to the police station. We’ve asked the SHO and other officials to conduct an investigation into the matter. Strict actions will be taken: Yogendra Kumar, SP, Begusarai (14.06) pic.twitter.com/gRNipHtx4N

This is how desis reacted to this bizarre happening.

The authorities should hold that marriage void.

My & my single boys 😹😹👇👇 pic.twitter.com/dyXuYQyMoX

It was quite common in Begusarai and Bhagalpur region in the 90s and early 2000. Actually in the past due to dowry, many influential peopels in the area invented this trick and it is still ongoing though not very common now as educated girls do not prefer such marriages.