No matter how much people try to ignore it, climate change is real and extremely dangerous. The melting glaciers, forest fires, drought, and record-breaking temperatures in summer and winter are nothing but evidence to the fact that the Earth is crying for help.

A video of an alleged “glacier wall” breaking off and sliding onto the highway in Kinnaur, Himachal Pradesh, is a visual of how daunting climate change can be. According to a report by India Today, the incident took place in Tinku Nallah, near Pooh on NH-5 and the video was uploaded by IRS Officer Naveed Trumboo.

TOI reported that the breaking of the 10-feet high glacier wall stranded several tourists on the highway. The video captures a few people recording the incident while many tried to warn them against it. The snow is seen sliding towards the cars while frantic tourists continue to scream “Go back!”. 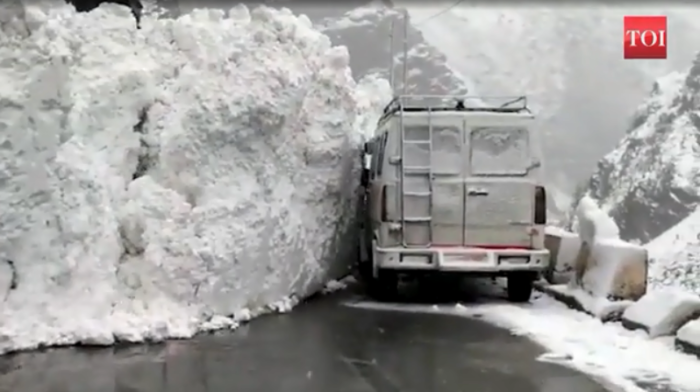 Ever seen the force of a moving glacier in real-time? This is in Tinku nallah near Pooh on NH-5, Kinnaur, HP.. #ClimateChange is not a distant reality. pic.twitter.com/J7ifxaAh1g

People on the internet expressed their concern over the incident, climate change at large, and on the fact that some people would invite danger just to capture a video.

This is like Nature unleashing its monsters to wage war on us for abusing it. We deserve this.

This is disaster created by us and those filming it don’t have regret. We should be ashamed of ourselves 😔

People need to be educated about calamities and safety measures so that they can pass it on to kids as well. It’s no brainier to screw yourself for the unseen which most of the tourists in India aren’t prepared to handle. Excitement could be deceptive.

Nature is always stronger than anything human made…. 👀🌊💦🗻🏔🌋⛰❄

Look … How fine line exists b/n life & death😛
But, rare is discovered by those who dare thats a fact too.👌

There were also some who tried pointing out that it wasn’t a “glacier wall” that broke. Instead, it was an avalanche and that such incidents happen on a regular basis.

This is not a glacier..this is part of an avalanche that is slipping on road because even road has an ice layer over it & as a result there is poor friction.

Glaciers are huge and move at a very slow rate. They carry till and deposit over time. This is not a glacier. Glaciers are what developed our landscapes. This is just lots of snow slidding on on a downward slope.

It's not a glacier sir. Avalanche it is in all probability.

It looks like softly packed snow. A glacier would be made of blocks of ice. This is not a glacier. IMO they don't build roads in path of a glacier.

Avalanche or a glacier, this video sure does look terrifying!