Chahatt Khanna Says Uorfi Javed Isn’t Fit To Be A Mom Or Wife, She Hits Back

Urfi, or as we now say ‘Uorfi’ Javed, has been locking horns with several celebs who seem to have been offended by her dressing sense, style, and lifestyle. After Farah Khan Ali and Rahul Vaidya, it’s TV star Chahatt Khanna, popular for her stints in shows like ‘Bade Achhe Lagte Hain’ and ‘Qubool Hai’ who is engaged in a war of words with Uorfi.

Their banter dates back to when Khanna commented on Uorfi’s outfits. The aspiring actor then gave it back to her by taking a dig at Khanna’s two divorces and shaming her after her name emerged in the ongoing Sukesh Chandrasekhar’s money laundering case.

Probably irked by Uorfi’s retaliation, Khanna took to her Instagram stories and wrote that Uorfi is commenting without knowing the entire truth.

(There’s no point in arguing with someone who is brainless. If only she had a brain, she would have worked and not gone around doing semi-nude spottings. It’s okay you cannot become an aunty, wife, or even a mother. Stay happy by calling others aunty) 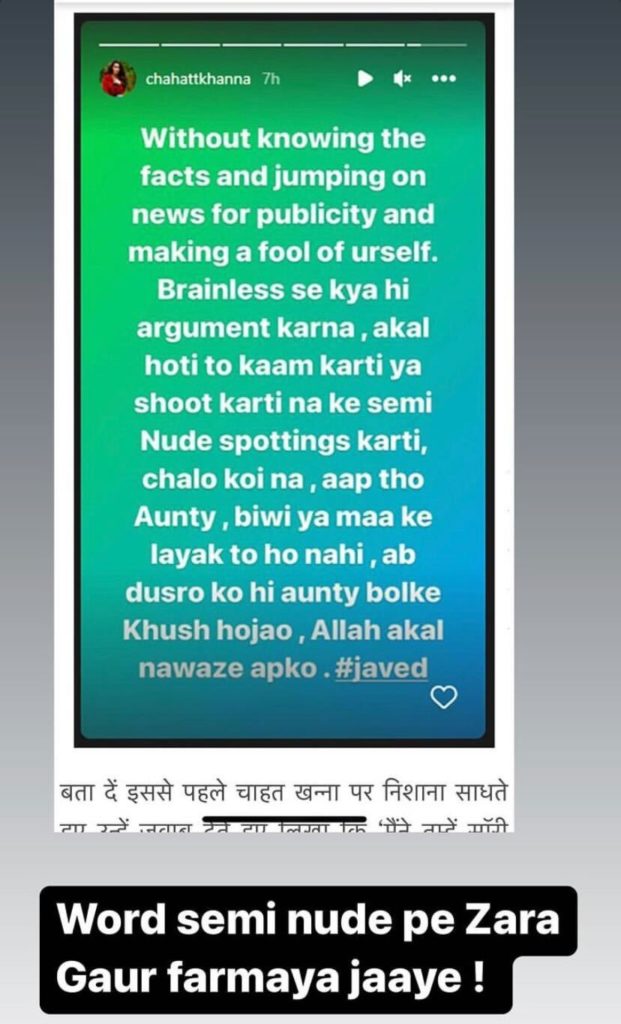 She added that she is very satisfied and asked Khanna what has she achieved by getting married twice.  “Aur Chahatt Ji aap bataiye. Aap toh do-do baar biwi ban chuki aapne kya ukhaad liya? (Since you married twice, you should tell me about your achievements).”

Uorfi went on to inform Khanna that there are multiple ways to be a mother and suggested her, “Mai apna dekh lungi, aap apna dekhiye.”

Since Khanna also took a dig at Uorfi’s work, the social media personality asked her to take a chill pill since no one else is running her house except her.

People on Reddit were pretty impressed by how Uorfi handled the cringe attacks by Khanna.

The misogyny is coming from inside the house with Chahat’s cringe attacks on Uorfi! Hats off to Uorfi for taking one for the team and standing up for herself. Respect! from InstaCelebsGossip

They lauded her for standing up for herself.

I don’t understand why people are after Uorfi. She has her ways and she enjoys them. Her clothes, her life, her home, her finances, how is that everyone else’s business?