Indian streets are like that Aladdin ka Chirag that just keeps on giving. Earlier, we found a computer science graduate begging for alms in Varanasi. An elderly violinist living on the streets of Kolkata was also offered financial aid by local cops.

Now, an e-rickshaw wala is grabbing eyeballs for offering free rides to his ‘intelligent’ passengers.

The toto (battery rickshaw) driver identified as Suranjan Karmakar was spotted by a Facebook user in Liluah, West Bengal, reported Times Now. In his post, the user named Sankalan Sarkar shared that he along with his wife was traveling on a man’s toto when the driver suddenly turned to them and asked, “I’ll let go of the fare if you can answer 15 general knowledge questions, I’m going to ask you.”

At this point, Sarkar started doubting the man’s motive. However, to gauge the depth of the water, he said to him, “‘I’ll give you the fare anyway but let’s hear your questions out.” The driver immediately jumped to action and posed his first question to them. “Who wrote Jana Gana Mana Adhi?” Here, Sarkar thought he might not be in the right frame of mind. However, when he asked his second question, things got real. “Who was the first CM of West Bengal?” asked Karmakar.

“Now it was my turn to eat humble pie. Using all my presentation skills gathered from a 13-year corporate existence, I tried B.C.Ray. I was wrong,” admitted Sarkar.

This GK quiz went on for quite a while. “From Sridevi’s birthdate to the world’s first test-tube baby, we covered a wide range of topics. I asked him one or two, and he answered them all. I was impressed,” the post read.

A while later, the toto driver revealed that financial constraints made him drop out of school when he was in standard 6. However, he never stopped learning. “I keep reading these things up till 2 AM at night, every day. I am a member of the Liluah Book Fair Foundation as well,” the driver divulged.

As the couple was about the reach their destination, the driver showed them an A4-sized laminated picture of Tipu Sultan displayed on the vehicle’s windshield. “I celebrate every important person’s birthday. Today is Tipu Sultan’s (disputed) birth anniversary,” the driver said.

Interestingly, driver Karmakar has celebrated the birth anniversary of many noted personalities including Stephen Hawking, Albert Einstein, Manohar Aich, Kalpana Chawla in the same fashion. He further said, “You can look me up in Google as ‘Adbhut Totowala’.”

Check out the reactions of people online: 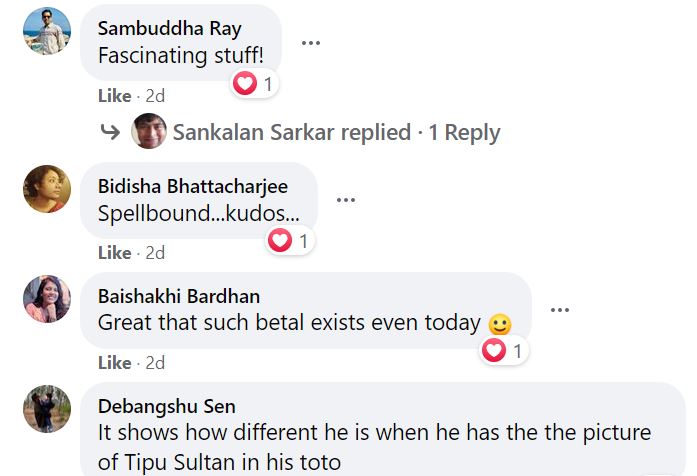 Hats off to this man and his willingness to learn and share knowledge. He is indeed adbhut!