Anand Mahindra is one of the few people in India who, despite being the chairman of a huge company, truly goes out of his way to appreciate the smallest of efforts. For example, his venture into the cyberspace brought him across a shoe doctor, who amazed him with his marketing skills. Then there was an unknown singer who turned himself into a one-man band to Mahindra’s surprise. And this time it’s an army jawan who has caught his eye.

In a video that’s been doing the rounds, a jawan in an army cantonment can be seen using a peculiar contraption to clean the roads. 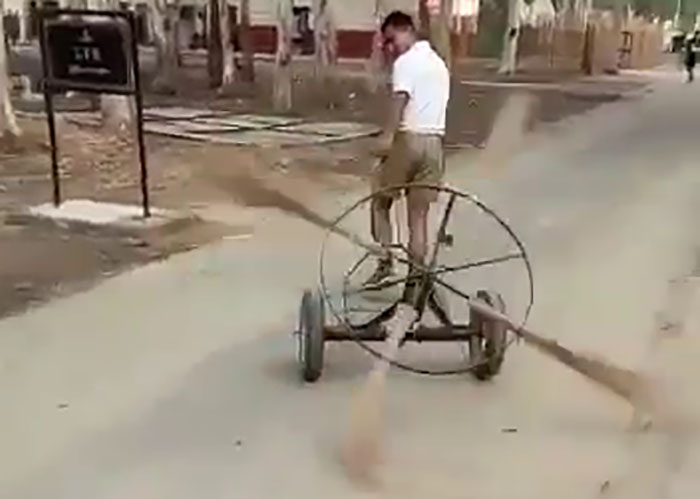 Anand Mahindra likes to share WhatsApp videos and this time he shed light on a man dragging an instrument that has four brooms attached to a circular object. Now, that object is probably connected with a pulley system that rotates it when the apparatus moves forward. And that brings down one broom after another, thereby cleaning the road.

Considering how Mahindra hadn’t seen this before, he was mesmerised by the efficiency and beauty of it. And while appreciating India’s affinity for ‘jugaad’, Mahindra came up with an idea of collecting items that are as unique as this rotatory broom. Additionally, he said that he would open a museum of sorts to house and display them.

I have long advocated that india can’t settle only for ‘jugaad’ (make-do)& has to shoot for ‘jhakaas’ (Mumbai slang for ‘brilliant’)Still, I would like to create a museum of these fascinating jugaad devices somewhere. Maybe at Mahindra Reaearch Valley in Chennai? @RajanWadhera1 ? pic.twitter.com/JBAtieZwdr

“I have long advocated that india can’t settle only for ‘jugaad’ (make-do)& has to shoot for ‘jhakaas’ (Mumbai slang for ‘brilliant’)Still, I would like to create a museum of these fascinating jugaad devices somewhere. Maybe at Mahindra Reaearch Valley in Chennai?”

Great idea.
“If #Necessity is the mother of all invention, #discontent is the father of all progress”!!
Discontent or sheer wastage of energy brings in these creative ideas. #jugaad is what we will continue to see, specially in the poor third world. Lower in value & cost.

2. That’s an even better idea.

3. People are coming in with suggestions as well.

This is indeed a very good idea, but instead of putting those dust aside, we should arrange something we can actually pull those dust and catch it in a bucket, and then we can throw it in some appropriate place.
Thats why Dubai's roads are so clean, whereas ours are not.

It’s a brilliant idea to preserve such talented art!

5. A small tweet for him, a lot of motivation for us.

Your vision of aspiration is quite an inspiration

In a time where we’re constantly looking for ready-made machines, Anand Mahindra is the only one who’s pushing everyone to make something with their own hands. He’s also showing us that nobody needs a degree to make things like this. They just need some imagination. So, start creating and maybe Anand Mahindra might feature you next on his Twitter feed.