Our world grows in terms of population with every second. However, there’s only a select few who break the mould and become superstars of their craft. But why is so much potential talent being wasted? Well, for starters, our system is hell-bent on putting everyone through a cookie-cutter, no matter where their interest lies. And secondly, hardly anyone is looking out for these talented individuals.

Thankfully, Anand Mahindra, Executive Chairman of the Mahindra Group, is one such messiah who’s always on the lookout for innovators and raw talent. Earlier this year, he had helped out a shoe doctor to improve his workplace, all with the help of Twitter and WhatsApp. Now, he’s back at it again after coming across a musician who has quite a few tricks up his sleeve.

In a video re-posted by Anand Mahindra, an unknown musician can be seen playing drums, a harmonica and a guitar. And not one a time but all at once. 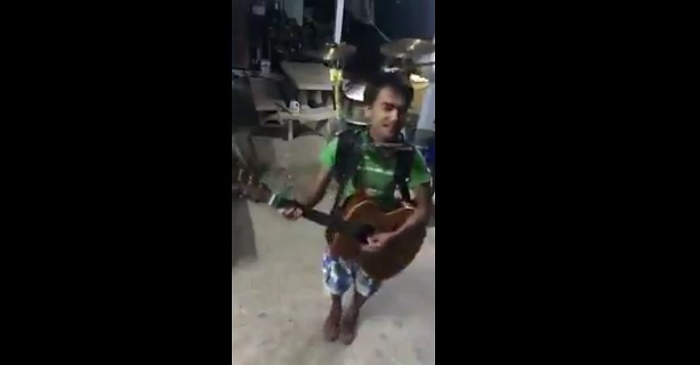 As soon as the video begins, you can see that he’s wearing a set of drums on his back. He takes his time to attach the guitar to one of the drums and set the harmonica appropriately. After that he breaks into a song that sounds like John Denver’s ‘Take Me Home’ oh so effortlessly.

Anand Mahindra was naturally surprised by how this man was doing the work of an entire four-man band all by himself. However, since the man’s identity is unknown, Mahindra has put out a plea to desi Twitter to find out who he’s as he wishes to reward him in some way. This is truly inspirational.

#whatsappwonderbox The friend who posted this wasn’t sure where this rather resourceful one-man-band was from. He suspects somewhere in the NorthEast. Anyone know him? I’d like to give him an award for innovation or musical talent—haven’t quite decided which one yet! 😊 pic.twitter.com/MHA3DqXQZf

“The friend who posted this wasn’t sure where this rather resourceful one-man-band was from. He suspects somewhere in the NorthEast. Anyone know him? I’d like to give him an award for innovation or musical talent—haven’t quite decided which one yet!”

This one-of-a-kind musician’s talent mesmerised everyone and they lauded him through re-tweets and likes.

1. From one star to another.

What a ⭐️.. no idea who he is or where he’s at but he sure deserves a RT. #musiclove #makehimfamous #onemanband pic.twitter.com/4WRAVEnnAu

If there is a will there is a way. This champ is just proved that. https://t.co/pX75kyUmd3

Outstanding… Out of the world…Admire your appreciation for talent Sir. https://t.co/l3Re4TmJ1x

Innovation is the offspring of need but nurtured by passion https://t.co/TCnfRv4rKR

7. One of the most innovative things in existence.

This is quite innovative! https://t.co/1wQeVXs9Ch

8. There’s a bright side to everything.

Of all the stupid, waste of memory, stuff we receive on whatsapp, once in a while comes a gem like this. Find the #onemanband and I am sure he would be delighted that @anandmahindra is looking for him😃😃 https://t.co/VzHv9jWlml

what a creativity! must be found and rewarded. https://t.co/FgBlr1jtf5

Due to all the negativity that’s propagated by media and the internet, we’ve acquired a very pessimistic view of our world. However, moments like these are a ray of optimism that unites humanity to do something good. I hope Anand Mahindra gets in touch with this musician and organises a show for him because a lot of people will be willing to see it.