Raj Kundra’s arrest by the Mumbai police and his alleged involvement in pornography has been dominating headlines since yesterday. Several people online called for a boycott of Bollywood as they slammed their “hypocrisy”.

According to Hindustan Times, YouTuber Puneet Kaur took to her Instagram Stories to address the matter. She alleged that Raj Kundra had reached out to her for “hot shots” in the past and that at the time, she gave him the benefit of the doubt and thought his account was hacked. 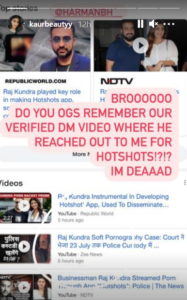 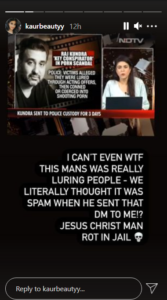 This is the video she talked about in her stories:

Besides Puneet Kaur, Poonam Pandey and Sherlyn Chopra, both popular models, made some shocking allegations against Raj Kundra.

“I collaborated with the company (which made the app involved in the said pornography case) for an app named after me in March 2019. We had agreed upon a certain percentage of the revenue generated by the app to be given to me. However, I realised certain discrepancies in revenue sharing and hence, decided to terminate the contract. I also informed them about the same via email. All hell has broken loose since.”

Poonam added how they allegedly continued to post her pictures and videos without her consent and leaked her contact number.

“They continue to post my pictures and videos on the app. To my horror, they also leaked my personal mobile number along with messages like ‘Call me now as I am free to talk’ and ‘Call me now. Let us talk and I will strip for you’ on the app. After that, I started receiving calls from all over, not in dozens but thousands, at odd hours, asking me for explicit services. People started sending me pornographic images and videos.”

She narrated how she had to flee the country due to this incident.

“I even left the country for three months hoping that the situation will become normal on its own. However, as soon as I landed back, I started receiving calls and obscene messages all over again. I changed my number, but after I messaged Saurabh Kushwah (one of the associates of the app company, who is one of the accused) from my new number, asking him to refrain from uploading my pictures and videos on the app, I started receiving calls and messages on that number, too.”

Times Now reports that Sherlyn Chopra did 15-20 projects for Raj Kundra for which she was paid a hefty amount of  Rs 30 lakh per project.

Another model named Sagrika alleged that she was asked to do a “nude video chat” over Whatsapp for an audition and that Raj Kundra was involved in it, reports Times Now.

According to TOI, Mumbai Police have confirmed that they have found no active involvement of Shilpa Shetty in the case.

“We have not been able to any find any active role (of Shilpa Shetty) yet. We are investigating. We will appeal to the victims to come forward and contact the Crime Branch Mumbai and we’ll take appropriate action,” said the Joint Commissioner of Police (Crime).

What do you think of these recent allegations? Tell us.