Bharatanatyam is a very graceful dance form from Tamil Nadu, India. It takes immense efforts and patience to get the ‘mudras’ right, the posture is difficult to maintain where you sit with your legs bent, knees flexed out, the delicate neck movement that accompanies, it takes a lot of practice to get it perfectly. Expressions play a very important role in Bharatanatyam, as a matter of fact, in any art form!

The recent Bharatanatyam performance by Aishwarya Dhanush at the UN is sans everything that I just mentioned above. Twitter is fuming over the performance by doubting her caliber as a classical dancer! 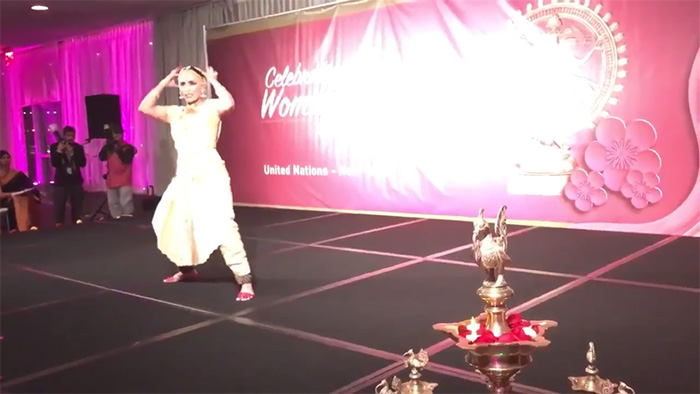 Twitter is raging over her performance. Take a look at some of the reactions!

The pathetic state of Bharatanatyam at the UN. https://t.co/240ptkrejd

2. It seems that her body has decided to not dance to the rhythm!

@nimmypal No grace whatsoever in her movements. And there are so many good dancers in India. @aratnam

3. Yes, that was not a very fine performance

@PriyaRaju Even someone who knows very little about dance can tell how amateurish (for lack of a better word) it is! @aratnam

5. Dhanush’s reaction must have been ditto

A professional Bharatnatyam dancer came forward to say that Aishwarya’s performance was not up to the mark. This is what she said to IndiaToday.

“The postures are terrible. No proper footwork. That’s not how a Bharatnatyam recital takes place. The whole song is basically unutilised. If you notice, she is neither dancing to the lyrics nor to the bol. From the lack of grace, it is very evident that she is not a “dancer.” Also, considering how she is performing worse than a beginner in Bharatnatyam, she shouldn’t have been on stage in the first place, leave alone at the UN. I think it is very ungraceful.”

FYI, Aishwarya is a Goodwill Ambassador to the UN and her Wikipedia information mentions that she is a classical dancer. It is her responsibility to represent the culture of India in its true light and this surely doesn’t do that.