Women in Afghanistan are looking at an uncertain future after the Taliban captured the country. While many fled the country, stopped going to work, and hid their documents, some fearless female journalists went back to work and even interviewed members of the Taliban despite the visible threats.

On Tuesday, the Taliban “vowed” to respect women’s rights that were “within the norms of Islamic law”. They encouraged women to return to work and allowed girls to return to school while handing out Islamic headscarves at the door, reported TIME.

Just a few days later, an Afghan woman journalist named Shabnam Dawran claimed that she was barred from working at her TV station, even though her male colleagues were allowed. 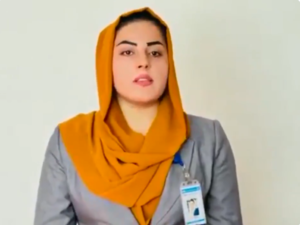 “I work in state-run news organisation RTA Pashto. After the Taliban took over Kabul, I went to my office the next morning where I was told to not come to work. When I asked what the reason was, they said the rules have now changed and women are not allowed to work in RTA anymore.”

Shabnam claimed that while women working at private firms are still going to work, those working at government organizations have been barred. According to The Hindu, the Taliban earlier had urged women to join the government.

Shabnam went on to add:

As Afghan women journalists ask for right to work
Shabnam Khan Dawran, an anchor at RTA (Radio Television #Afghanistan) said #Taliban has not allowed her: “I wanted to return to work, but ….They told me that the regime has changed and you cannot work,” said Dawran via @TOLOnews pic.twitter.com/8yhD0rTmQw

“We all had an idea about what could happen to women if the Taliban came to power again. But after that interview, we thought things might be different. However, what the Taliban are doing with the government media is not good.”

In a video that has gone viral, Shamnam is seen wearing a hijab, showing her office card, and saying ‘Our lives are under threat’.

Taliban didn't allow my ex-colleague here in @TOLOnews and famous anchor of the State-owned @rtapashto Shabnam Dawran to start her work today.
" Despite wearing a hijab & carrying correct ID, I was told by Taliban: The regime has changed. Go home"#Afghanistan #Talban pic.twitter.com/rXK7LWvddX

This incident is being widely condemned on social media. Here’s what some people said:

Sad. Really sad. Sorry for you and #Afghanistan. We pray that here will be a new dawn after the current prevailing darkness.

Very sad. I hope she can return to the newsroom soon.

This is the stark reality of women rights in #Afganisthan. Meet @shabnamdawran, TV news anchor stopped from working, despite wearing a hijab & carrying right ID. She was told: "The regime has changed. You are not allowed to work. Go home".
Being as a woman I strongly condemn it. pic.twitter.com/9nlYqftWi0