Ever since Kangana Ranaut’s ‘Koffee With Karan’ epic episode, people have been criticising Bollywood. The debate has largely resurfaced again with Sushant Singh Rajput‘s death where many alleged that the industry’s preference for ‘insiders’, its inherent nepotism had a significant role to play in driving him into suicide.

Adopting a fun take at things, YouTuber Salil Jamdar recently posted a parody video of the song ‘Zingaat’ from the film ‘Dhadak’ where he indirectly roasted Bollywood for their favouritism towards star-kids. From featuring mostly star-kids in big banner films to making remakes of regional blockbuster films and songs, the video takes a dig at the film industry of not making way for new talent.

The video starts with an audition where the Salil Jamdar is told that the lead role is always given to star-kids.

It then goes on to sarcastically glorify star kids like Alia Bhatt, Ranbir Kapoor, Janhvi Kapoor, and others where Jamdar is seen worshipping their framed pictures.

The lyrics of the songs mention how ‘Sairat’, the blockbuster Marathi film which was later remade into ‘Dhadak’ in Bollywood, managed to make 100 crores despite featuring ground-level actors in lead roles. However, B-town couldn’t muster up the courage to do the same.

Later in the video, Jamdar pokes fun at how star-kids only need a lip-job to feature in a film, while struggling actors stand in 10 km audition lines every day.

He then says that this obsession with star-kids is embedded in Indian history – “Raja ke bete ko raja hi mana.”

He highlighted this by pointing out how Taimur already has hundreds of fan accounts on social media!

People online have a lot of opinion after watching the video! Here’s what they said: 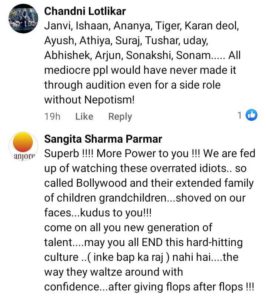 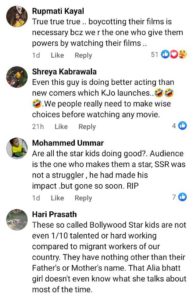 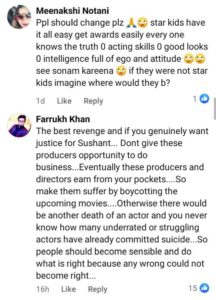 While the video is hilarious and has us laughing out loud, it does spill some hard truth!