There are plenty of fish in the sea and a little bait grabs the biggest catch. And if you are lucky enough, chances are you might hook a one of a kind catch that soon makes it to the headlines, like in this case.

A woman who went fishing with her husband in upstate New York couldn’t believe her eyes when she saw a strange-looking fish hooked on to her bait.

The woman, Debbie Geddes, who is a professional angler reeled in a fish with two mouths on Lake Champlain.

“When this particular fish bit, it felt like I had a nice fish on. I actually commented, ‘I hope it’s as big as it feels!’ When we got it in the boat I couldn’t believe what I was seeing! Two mouths! And yet this fish was healthy and thriving! Pretty amazing!” Geddes told reporters.

An average fishing day turned into an eventful day for Gedded when the bass fishing enthusiasts, known as Knotty Boys Fishing, posted a photo of the fish on Facebook.

“We quickly took a few pictures and released the fish.” That picture was eventually uploaded to Facebook by a co-worker of Geddes, Adam Facteau.

Adam Facteau told the media, “She (Debbie Geddes) wasn’t convinced anyone would care about the catch. I knew it would be popular.” Since it was posted, it has been shared more than 6,000 times.

“I just can’t believe all the attention this has received. The public’s responses/theories are quite interesting, to say the least. I personally believe it was caused by a previous injury, most likely from another angler,” Geddes said.

While some netizens jumped in with their speculations of the fish being two-mouthed, others couldn’t believe what they were seeing: 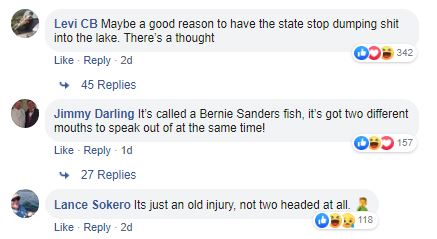 Amidst all the speculations about Geddes’s catch of a lifetime, one thing’s for sure, neither she nor netizens are going to forget the weird sight for a long time.