Aryan Khan’s arrest by the NCB caused a furore online and even though Shahrukh Khan’s family received backlash, there were those who stood by the superstar. Novelist Shobhaa De was among those who had other views on the matter.

NDTV reports her saying, “It’s very indicative of something far deeper that needs to be investigated more thoroughly. And because it’s such a high profile arrest today, it is generating that kind of sensationalistic, voyeuristic pleasure in seeing whether Aryan is going to be actually arrested and how, what statement is he going to be signing.”

She continues, “All of it, which has gone viral, has everything to do with his public profile, as the son of Shah Rukh Khan. But, the problem is very much there. This should act as a wakeup call, and what we have to remember is that whether it’s Shah Rukh Khan’s son, it’s Aryan Khan, or anybody else, due legal process is being followed.”

She signed off musing, “Had he not been Shahrukh Khan’s son, had it been just another arrest of a rich kid, I don’t think anyone would’ve been that interested in following this case.”

Sussanne Khan was quick to retort to Shobha’s post and she wrote that the issue wasn’t about Aryan Khan at all. Sussanne called it a witch hunt and singer Mika Singh expressed a similar opinion in his tweet. 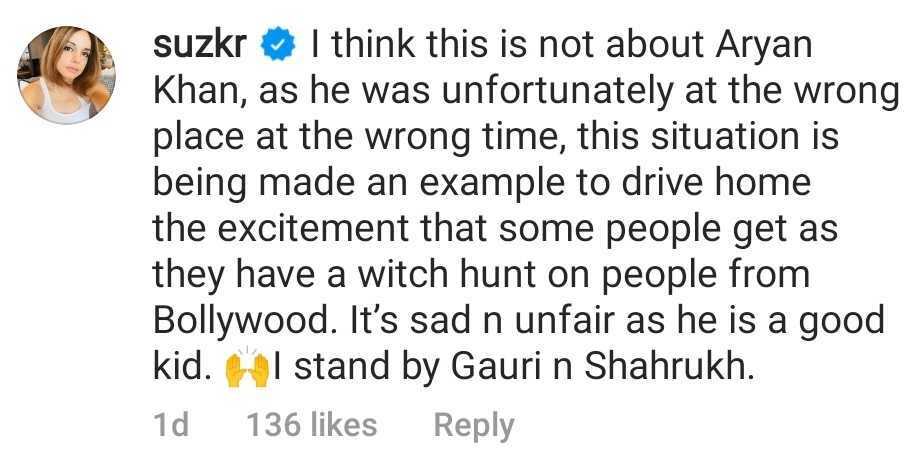 Wow what a beautiful @CordeliaCruises I wish I could have visted. I heard lots people were there but I couldn’t see anyone els accept #AaryanKhan ..
Itne bade cruse mei sirf aariyan hi ghoom raha tha kya.. hadd hai.. good morning have a wonderful day.. pic.twitter.com/BJ72yHpkl5

What do you think of their views? Tell us.