From ‘Stalking’ Simran To ‘Groping’ Her, Guy Points Out Raj’s ‘Problematic Behavior’ In DDLJ

It’s been 25 years that the iconic Bollywood movie ‘Dilwale Dulhania Le Jayenge’ hit theatres. Raj and Simran (the lead characters), portrayed by Shah Rukh Khan and Kajol made a special place in our hearts ever since. 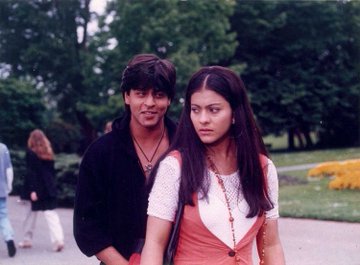 Their cute nook-jhook and simple romance swept us off our feet. However, little did we notice that the film was problematic in ways more than one.

While most of us were busy celebrating the massive success of the cult romantic drama, a Twitter user highlighted the toxic behavior of Raj in the movie. Addressing Raj as a ‘creep’, he pointed out:

Raj does the following to Simran:
1. Lie that he raped her as a joke
2. Tears her clothes in public (accidentally, but who pulls a woman by the back of her dress anyway?)
3. Forces her to dance, and in the process gropes her and feels up her bare back

Why do women love creeps? https://t.co/soPaiprJl0

If you think of it, Raj seriously messed up a couple of times in the film. Even ‘Anaarkali of Aarah’ actor Swara Bhaskar agreed to the fact that Bollywood sneakily made stalking seem so romantic that hardly anyone found it troublesome until now.

Sadly u r are right.. I mean abt what all Raj does.. This is precisely the power of #Bollywood right? It makes stalking seem romantic. And we all are influenced by it – sometimes in the form of nostalgia & sometimes despite our own best intent. We all need to learn & change 🙂 🙂 https://t.co/LTXIDMz3NP

Apparently, people online had a lot to say about the movie too. Have a look:

In the beginning they showed his as a awaara …so the perception what women had of him but who he really was .dont judge a book by its cover . They highlight his flaws – he fails exams , he does immature pranks – like stealing beer and teasing that something happened between

Sadly I don’t agree. I have never liked and will never like such acts of shame. The negative influence it has on our Society at large is unimaginable. Shame!

But how he grows n love makes him so matured . Sigh . Growth ! Criticising a legend of a movie sigh … Not right

Of course, Bollywood has power. That's why we wish artists become more responsible. I was 11 when I watched bits and pieces of DDLJ with my sis who was a huge fan. I didnt know Hindi then. Still thought Raj to be VERY irritating and that stupid father too.

Ironic, act of jauhar, which happened, is something to be spoken against when portrayed as a fearless act of women of that time, but sure rape as joke(the script could have gone well without it too, js) is nostalgia

While some talked about creative liberty, others noted that artists should become responsible while taking up problematic roles. What do you think of this? Tell us.