Raipur Mayor’s Nephew Gets Caught Without A Mask & Threatens To Suspend Cops, Watch

As the number of Covid-19 cases continues to surge across the country, the awareness surrounding safety protocols is more than ever. However, many have been caught flouting basic protocols, like wearing a mask, even a year after the pandemic began.

For example, a guy in Raipur was recently caught by the police for not wearing a mask in public. In a video that has gone viral, he can be seen riding on a scooter, maskless, before the police stopped him. A fellow passenger sits behind him who was wearing a mask, reports Times Now. 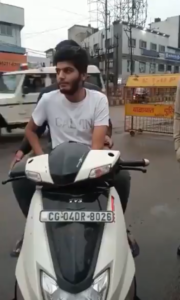 What’s shocking is that when the police started to interrogate him, the guy goes on to call somebody on the phone. He was identified as Raipur Mayor Ajaz Dhebar’s nephew. He asks the cops to speak to him properly and when they warn him that his license will be suspended, he threatens the cops saying he would get them suspended, reports Dainik Bhaskar. 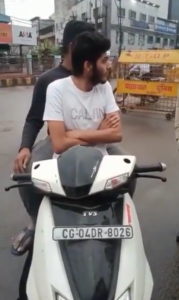 However, he was let go after a challan of Rs 500 was issued by the police.

He is duly fined of Rs 500 as per rules.
copy of challan is attached below. pic.twitter.com/i4sVmkxBOF

Here’s a video capturing the incident:

The video soon went viral and sparked outrage online. Many questioned that if it had been regular civilians and not the nephew of the mayor, would they be spared after such behavior.

Is this your nephew @AijazDhebar? Shame on him. This boy should be arrested @bhupeshbaghel pic.twitter.com/oYUahjqP9P

Chacha Tumhare Mayor hain toh Mask matlagao Bole Police has to book Special case for not Wearing Mask on him.

Ya he should be punished as an example as well . Mantri ho ya Shantri ka beta fine to dena padega. And should not argue with on duty policeman!!! @bhupeshbaghel @RaipurPoliceCG https://t.co/rVZQ27hXDg

Nepotism in politics.. But no one will talk about that. 😐 https://t.co/FZkSiQVtTT

Shouldn’t Covid-19 protocols be applied to every citizen equally?