Tennis ace Mahesh Bhupathi, in his post urging people to stop engaging with #MeToo accused had revealed a shocking statement that one of his talent industry friends had told him. The friend said that everyone in the industry was waiting for the #MeToo wave to die down in a month or so, and then it was going to be business as usual. But turns out, the allegations, the truths, the horrific tales of exploitation are far from over. Another actor, Niharika Singh, has come forth with a tale of her own.

A former Femina Miss India Earth (2005) and known for her role in the National Award winning film Miss Lovely, Niharika Singh has penned a powerful essay, detailing her own #MeToo encounters.

Screenshots of Niharika’s piece were shared by journalist Sandhya Menon, who has been collating #MeToo survivors’ stories and sharing them on Twitter.

Niharika and other women accused Siddiqui of making up lies in his autobiography, due to which he withdrew the book.

This is her side of the story. pic.twitter.com/XBVGgE3r0c

Niharika has called this an attempt to understanding which experiences in her own life entail abuse and how we, as a society, are reacting to movements like #MeToo.

“I decided to write this piece to expand my own understanding of what constitutes abuse, who we choose to punish and whom we are willing to forgive. Like the majority of Indian women, especially those from marginalized backgrounds, my entire life has been dotted with various forms of exploitation. Sexual, physical, emotional, verbal, economic – I’ve been through it all.”

She starts with her own history and her decision to come to Mumbai from UP with her younger sister to escape from casteist North Indian environment. Alas, Mumbai did not treat them any better. 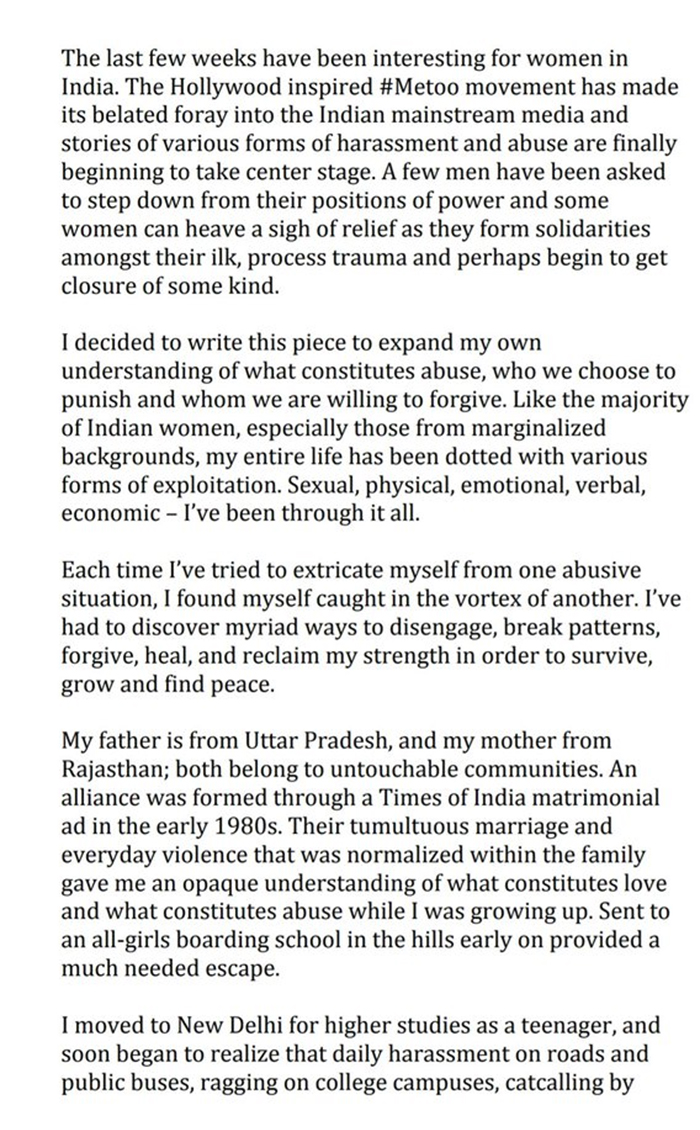 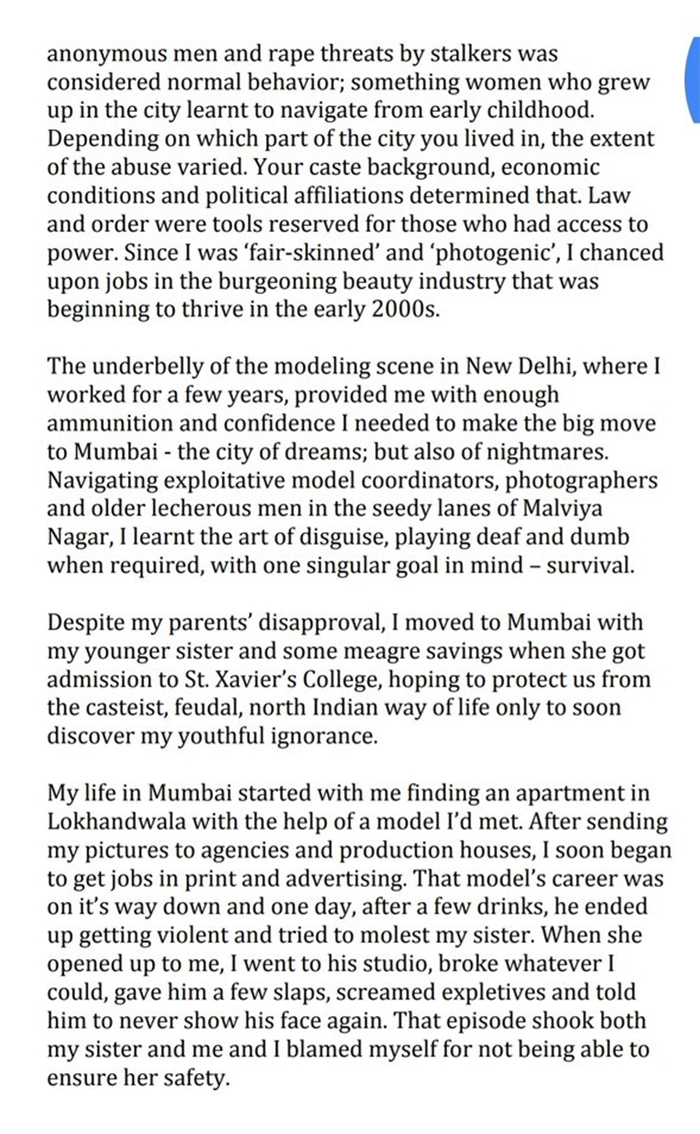 The defining moment in Niharika’s life came with her Miss India win in 2005. Following this honour, she looked forward to her Bollywood debut. However, that met several roadblocks, first with director Raj Kanwar, and eventually Bhushan Kumar.

“Bhushan Kumar called me to his office to sign ‘A New Love Ishtory’ where he gave me an envelope as a signing amount for the film. It contained two 500 Rupee notes (less than 14$). I got a text from him later that night- ‘I would love to know you more. Let’s get together sometime’.” 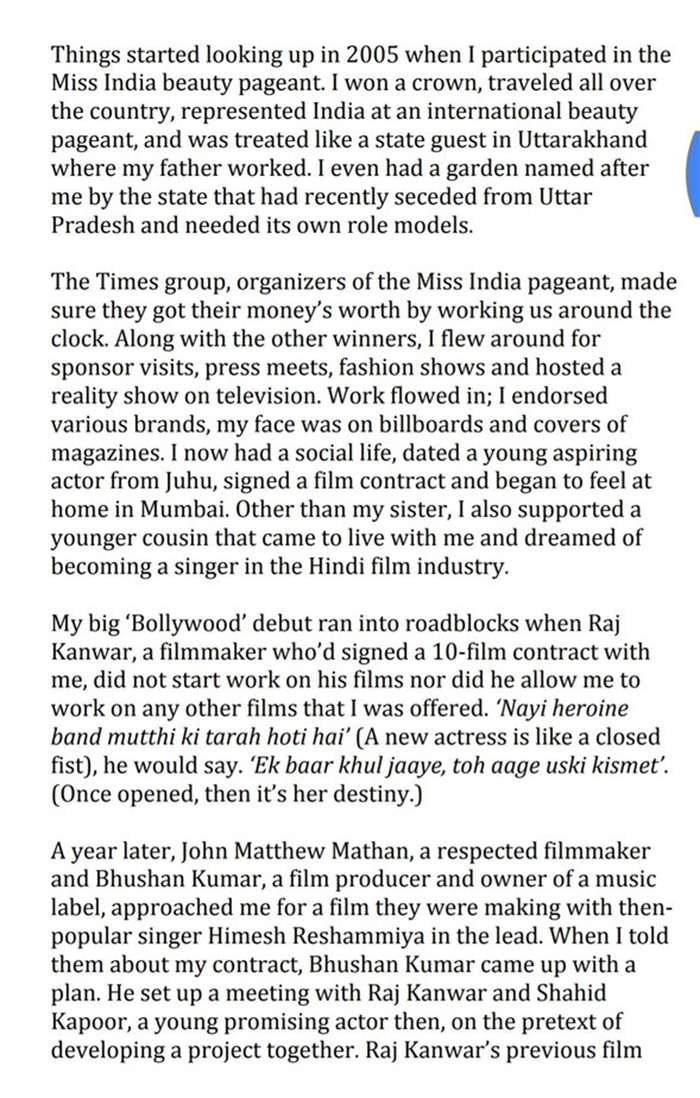 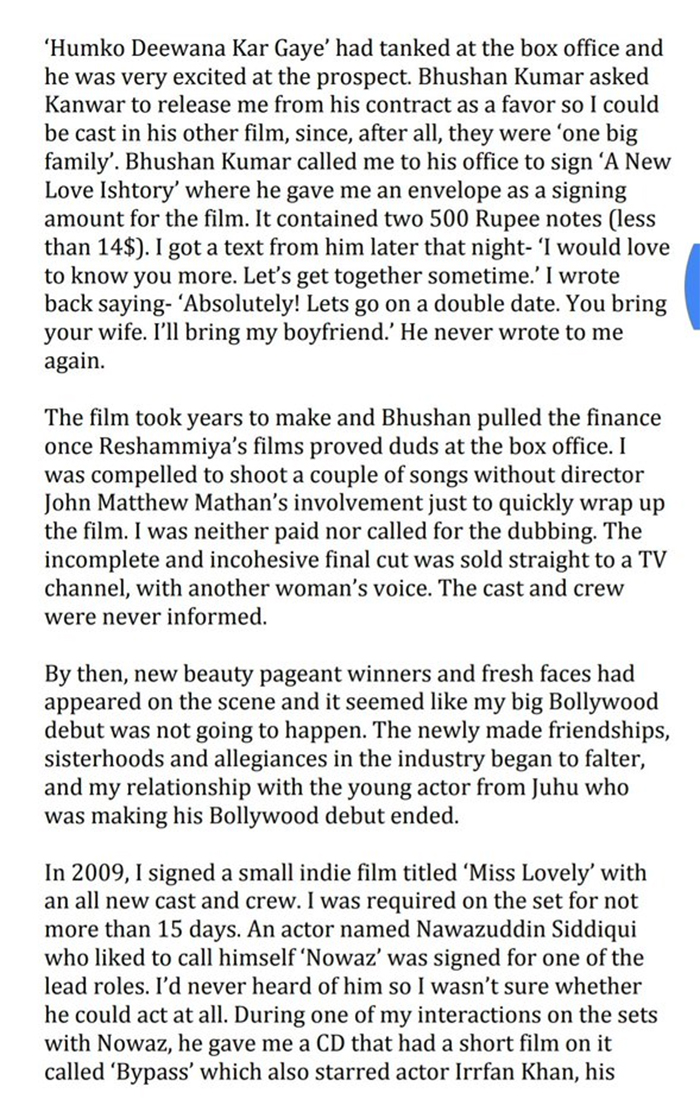 Niharika’s signing of the film ‘Miss Lovely’ and meeting with her co-actor Nawazuddin Siddiqui allegedly led to another series of traumatising experiences.

“When I opened the door, He (Nawazuddin) grabbed me. I tried to push him away but he wouldn’t let go.” 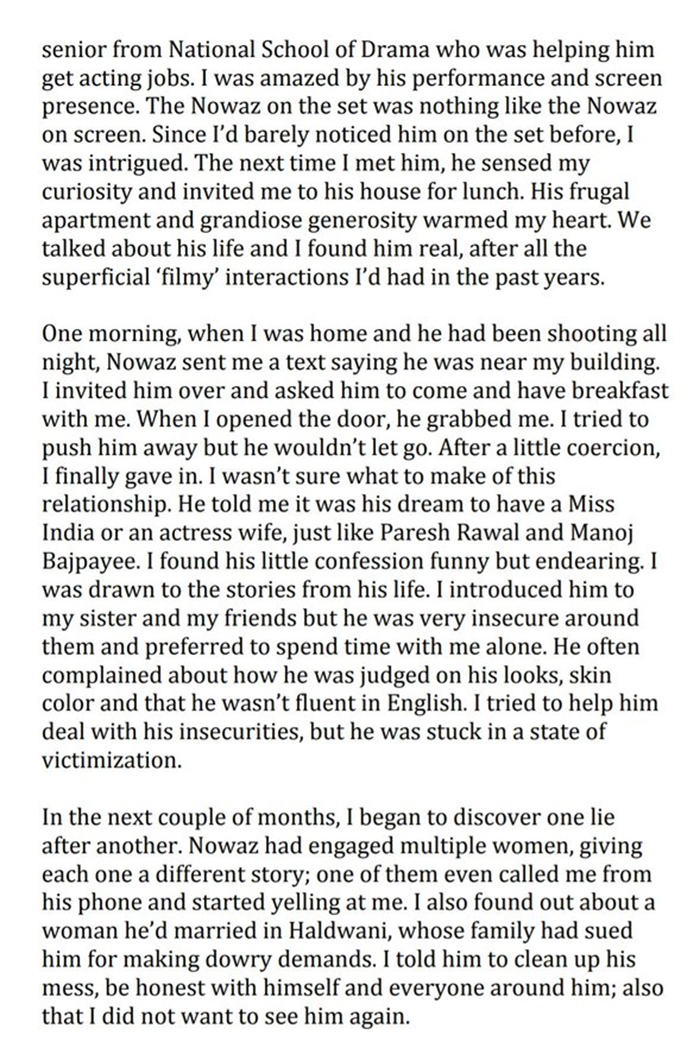 Things seemed to get better for Niharika when she met a non-industry man. However, that too turned out to be a nightmarish experience for her.

“Mayank, as I found out later, was a sociopath, and I broke off my engagement at the end of 2011. His ego was completely bruised and his anger was uncontrollable. Using casteist slurs, he got abusive and physically violent. I went to a friend’s house to protect myself.” 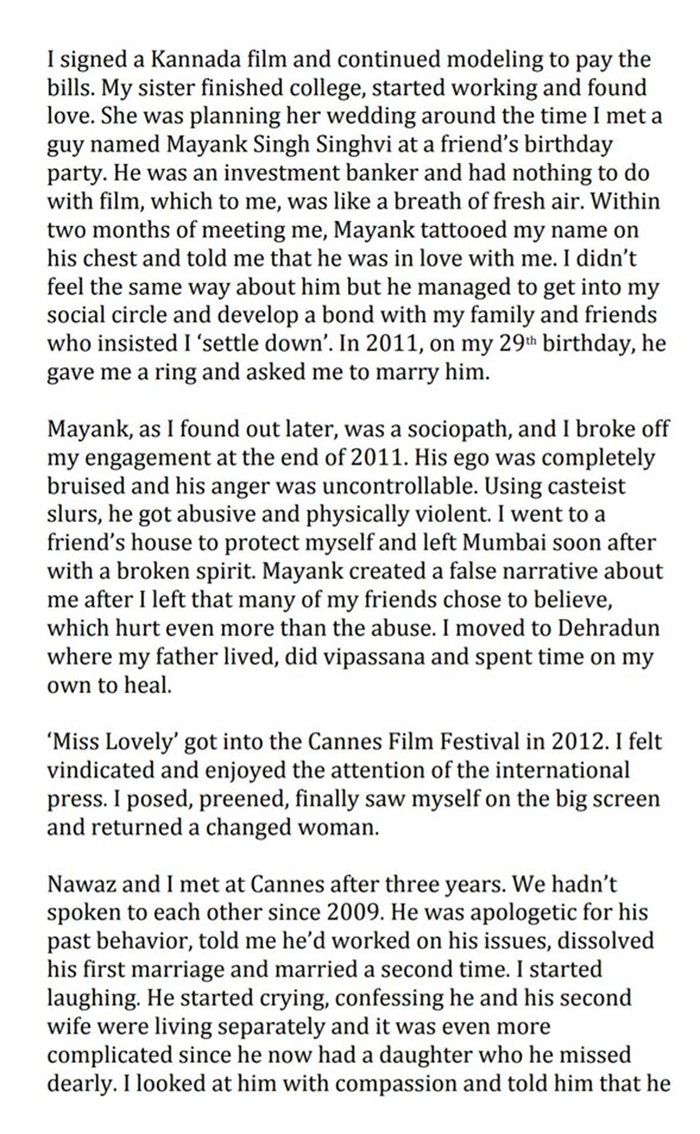 With Miss Lovely on its way to the prestigious Cannes, Niharika Singh and Nawazuddin Siddiqui’s paths crossed again.

“He (Nawaz) tried to re-engage me sexually, begging me to be with him but I refused, saying I was happy to be his friend and nothing else.” 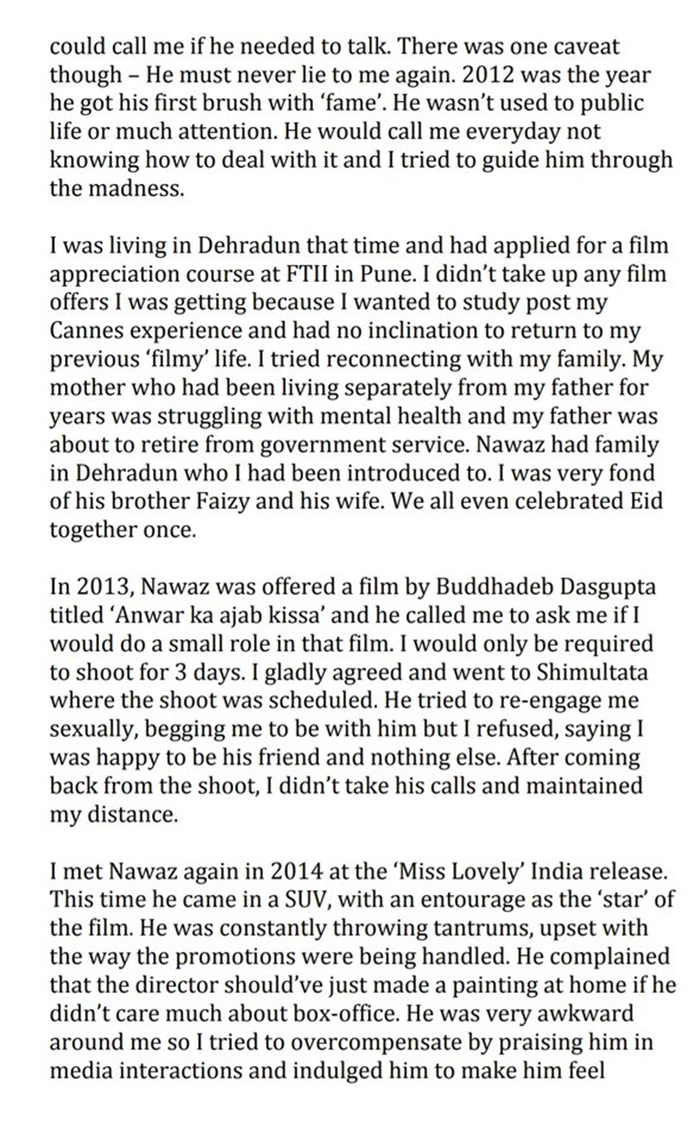 Niharika also goes on to allude to the controversy surrounding Nawazuddin’s memoir that had caused quite a stir.

The actor had eventually declared that he would withdraw it after Niharika and another woman mentioned in the book dismissed the stories pertaining to them as false.

“Director Anurag Kashyap, Nawaz’s mentor and close collaborator who chose to turn a blind eye towards sexual harassment within his own company, continues to support Nawaz and his story. Writer Rituparna Chatterjee with her completely unethical, defamatory and poorly researched book is not apologetic either.” 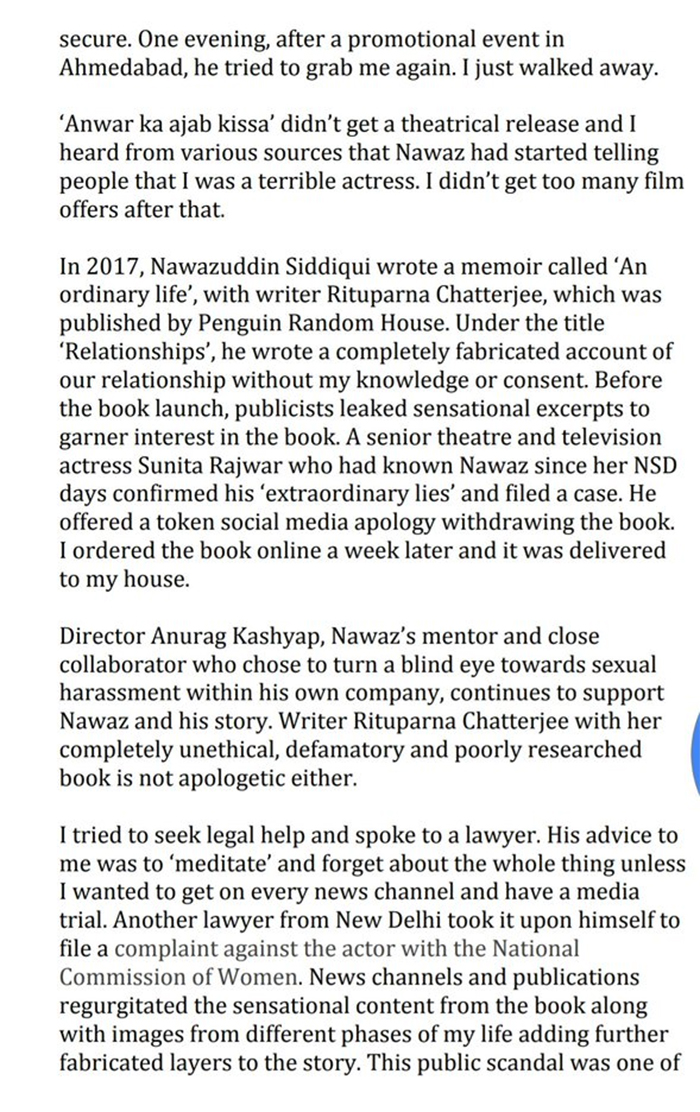 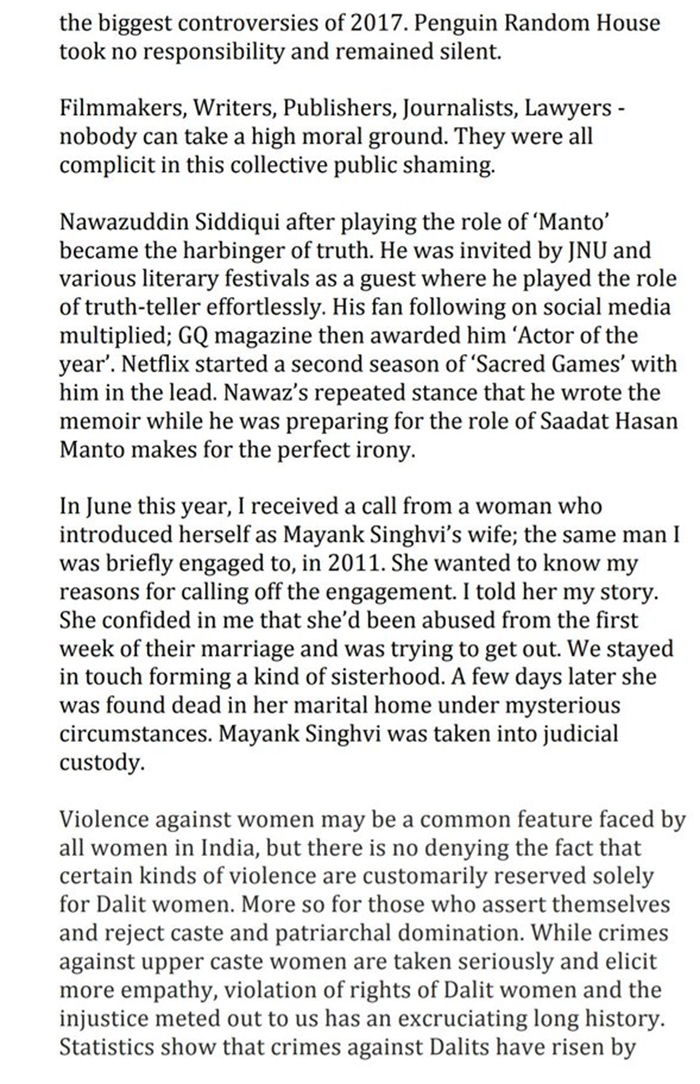 Speaking further on the violence against women, Niharika made a powerful point on the violation of Dalit women being a whole different category of atrocities reserved only for them.

“Violence against women may be a common feature faced by all women in India, but there is no denying the fact that certain kinds of violence are customarily reserved solely for Dalit women. More so for those who assert themselves and reject caste and patriarchal domination.”

In speaking about the role women play in upholding the oppressive patriarchy upheld by our society, Niharika brings up names of outspoken actor/director Nandita Das, whose father has been accused by several women of harassment. 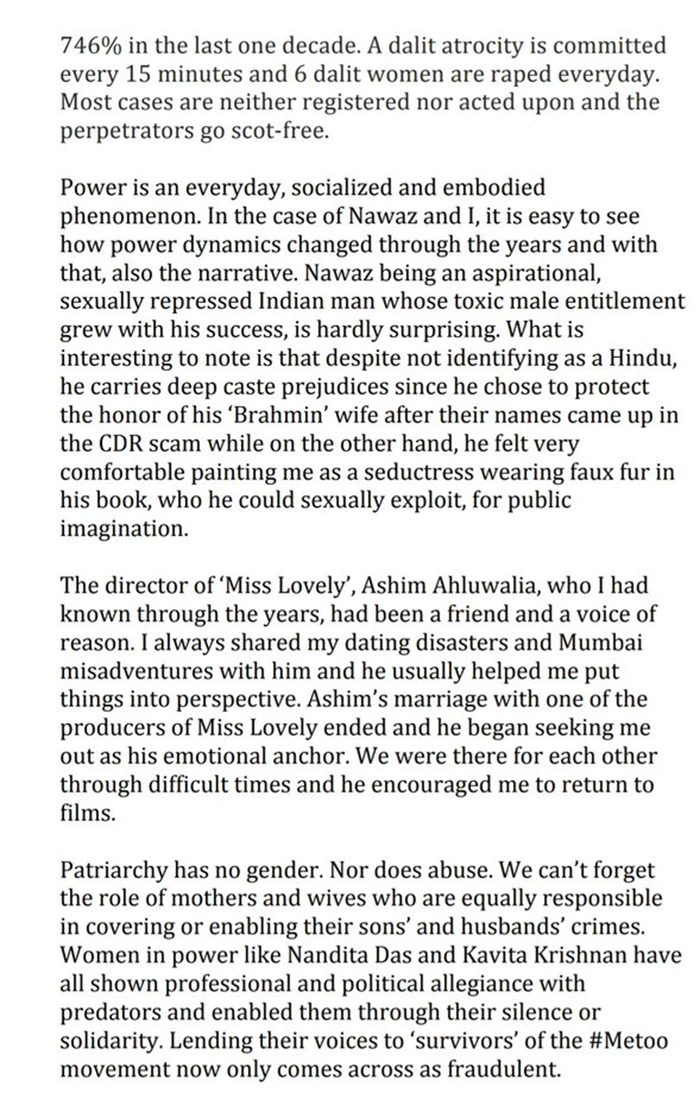 “Patriarchy has no gender. Nor does abuse. We can’t forget the role of mothers and wives who are equally responsible in covering or enabling their sons’ and husbands’ crimes. “

In a final blow, Niharika Singh attempts to strike hard and strong at the neoliberal feminism that speaks up only against oppression of a certain class, certain type of women while diplomatically ignoring everything else.

“It’s time to realize that the pompous, neoliberal, savarna feminism is not going to liberate anyone. We must note that it finally took a Dalit student, Raya Sarkar in academia and a beauty pageant winner, Tanushree Dutta, to burst the Bollywood bubble while they silently looked on for years.”

She concludes with an anecdote about another #MeToo accused director Sajid Khan, and a few ‘predictions’ he had deigned to make about three women a few years ago. 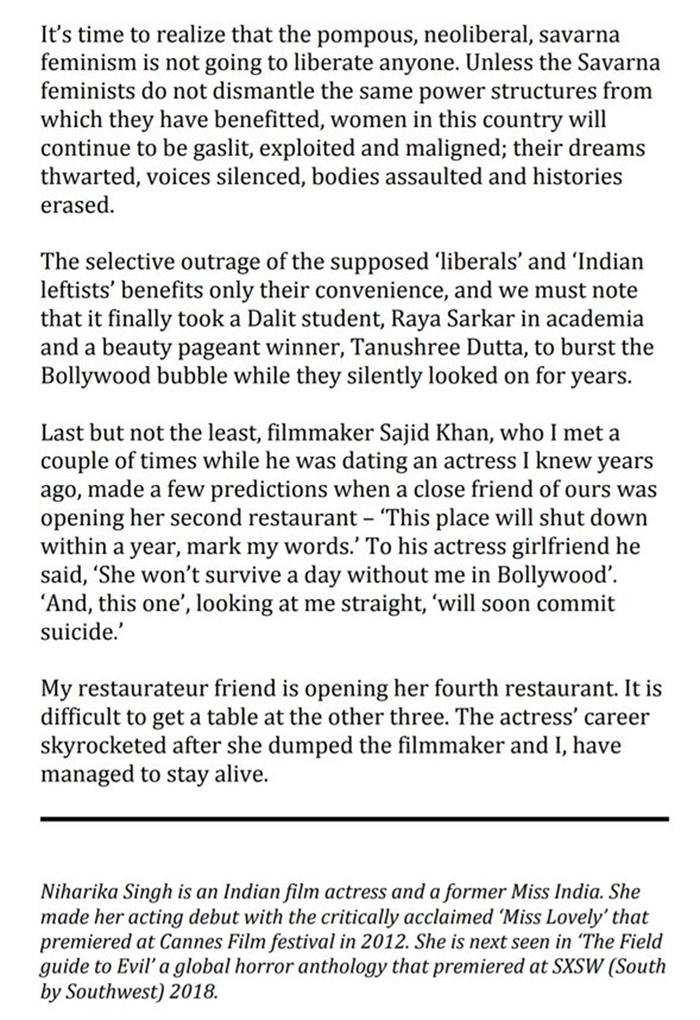 Niharika Singh’s account raises so many pointed questions that need to be answered to sustain this poweful movement. Otherwise, it could just end up being another force that is slowly losing momentum.