If you haven’t been paying attention, football fever has gripped the nation just in time for FIFA 2018 and fans couldn’t have been more thrilled. Social media is proof, with cheers louder than ever, it seems like no goal will go without whistles.

But while we have able contenders to up the ante on-field, Twitter RN is in awe of a gentleman off-field who isn’t using the football like you’d expect.

In a video that has gone viral, a man can be seen juggling a football with his legs atop a sidewalk and boy, is it jaw-dropping! 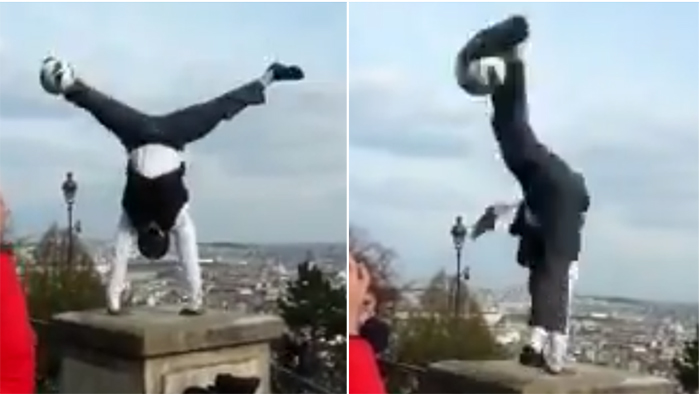 If you don’t believe me, watch the entire ‘jaw-dropping’ video shared by Anand Mahindra with the kind of response it deserves.

#whatsappwonderbox Just jaw-dropping.Not even the full video. Is this guy for real or a droid? He should be performing for packed audiences in major auditoriums. Sometimes I wonder if people who develop such skills are the ones who should be the richest-not on the pavement.. pic.twitter.com/Obg0j2uscn

“Just jaw-dropping.Not even the full video. Is this guy for real or a droid?

He should be performing for packed audiences in major auditoriums. Sometimes I wonder if people who develop such skills are the ones who should be the richest-not on the pavement.”

And we couldn’t agree more.

He was so enticed by the video, he found the 2nd part and shared the marvel with the rest of the world too.

2nd half of the video. Even more incredible…Dizzy just watching this. pic.twitter.com/rUJMee24s2

Needless to say, the man of the moment is been garnering fans and praises on the internet and rightly so.

The world is full of talents . We must recognise them.

Instead of a bland and insipid song and dance @FiIFworldcup2018 opening ceremony yesterday, these are the kind of talent and incredible acrobatic stuff they should be showing. https://t.co/a4UbdDtXJd

Seems he doesn’t believe in the term GRAVITY !!!

This is knowing your craft thoroughly…very professional displaying a high level of expertise and intricate dexterity honed from years of practice and performance. Great show.

He performs everyday at the church located on montmartre in Paris. Amazing skill. Interesting thing to note is many enjoy his performance and click videos but few leave any gratuity

And this is exactly why I love when the Internet does its thing and unearths gems like these!