What do you do when a lion escapes its enclosure at a zoo?

Don’t worry, we understand that you’re confused. But while you can afford to be, the staff at the zoo cannot. And hence, in a bid to train them on what to do in the scenario a lion escapes from its enclosure, the Tobe Zoo in Ehime, Japan, conducted a drill recently.

Since it was impossible to set a real lion free for the drill, the zoo management got a person to dress up in a lion costume. And you bet, it couldn’t have been more adorable and hilarious!

The video of the drill in progress was shot by a local news station and has been trending online. However, what got the people laughing their hearts out was the reactions of the real lions at the zoo, who had no idea what was happening!

Note the expression on the actual lions faces.
pic.twitter.com/azuJYQhLCw

The big cats looked puzzled and you can well make out from their expression that they were not happy to be mocked. 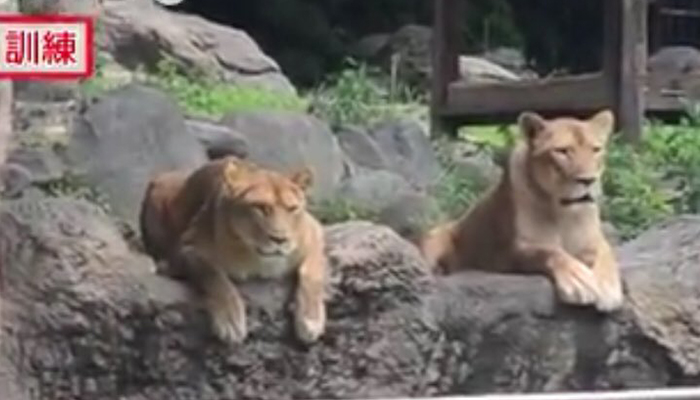 The clip which was posted on Saturday collected over 4.3 million views in less than two days and has given birth to a plethora of memes and jokes.

Lions are like “what in the hell is this?” pic.twitter.com/NFiI1RNkpb

“Are they mocking us, Martha”

"My man would put up a fight before getting caught. This is insulting!"

Lion1: “I dunno…did YOU hear anything about a break today?”

Lion2: “If they think we’re breeding with that dude? No. Just no.”

They’ve just taught the lions their emergency plan. I’m not sure that’s the smartest move.

“So this is what they think of us, Karen. I just can’t even…”

“I swear to god, Nala, I’m going to eat all of these people.”
“Don’t do that, Stacy.”
“Starting with whoever is in that insulting costume.”
“Stacy, you can’t eat of all of them…you’ve got to share.”

The one on our left is laughing at them. And the lioness on the right is offended and pissed off about it.

they chilling and enjoying the show

That is FABULOUS. It's like they're watching the best show they've ever seen.

I love how they think that net is going to stop a lion.

While the lions surely didn’t see that coming, I have never seen a funnier picture of lions than this!