Rude Customer Tries To Bully Her While Bargaining Cost, She Kicks His Ass On Chat

Correct me if I’m wrong, but there are some really mean and rude people who think people who are doing business or service ‘owe’ them something. They like to boss around and bully people. If they don’t get things done their way, they threaten them in various ways, bad reviews on social media being one of them.

Once in a while, however, someone gives it back to these ungrateful people and shows them their place.

Crocheter Karfty Katt once had a really rude customer who tried to bully her for a hand-crocheted blanket. She dished it back to him and I’m honestly so proud of her.

Made a co-worker hats. It's always nice to have your work appreciated! #crochet #crocheting #crochetlove #crochetaddict #hats #crochethat

Katt usually crochets cute beanies for herself and her cat, apart from some really amazing blankets. She takes orders on commission sometimes.

These hats are pretty pawsome I'd have to say.

This one time, a rude customer tried to bully her into making a blanket for his girlfriend for much cheaper than what Katt quoted. He threatened to bad mouth her too, but Katt was undeterred.

She shared her correspondence with Bored Panda and you’ll be so proud of her for the way she handled it.

It began when this guy messaged her on Instagram. 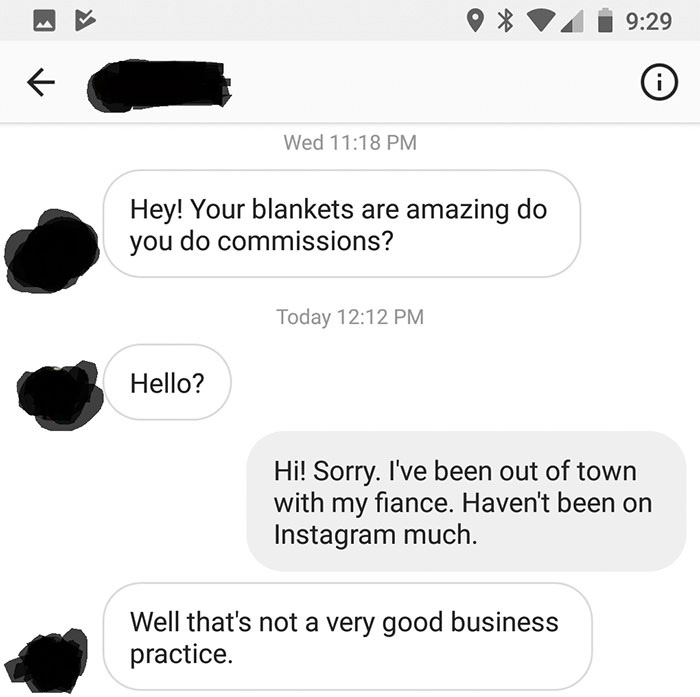 She even apologised to him for the late reply, but he continued acting like a douche. She got to the point directly.

He wasted no time in ordering her around like she owes it to him. 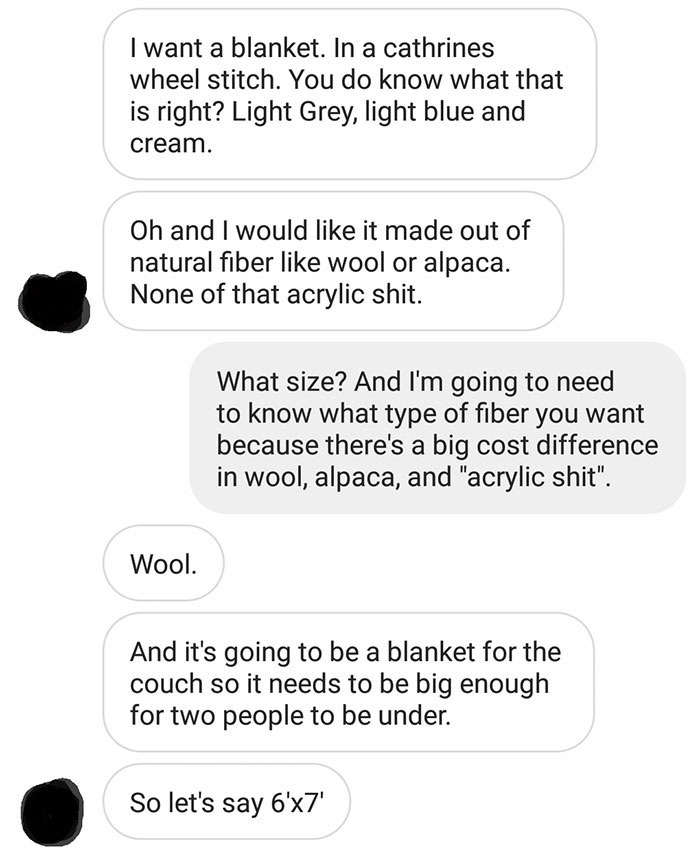 She took the specification and asked for some time to get back with a price. 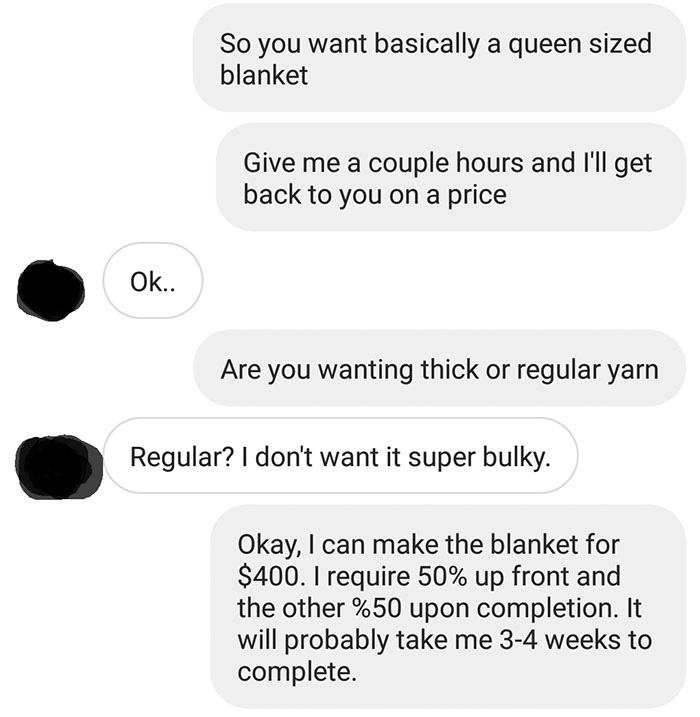 Now things started getting heated up. 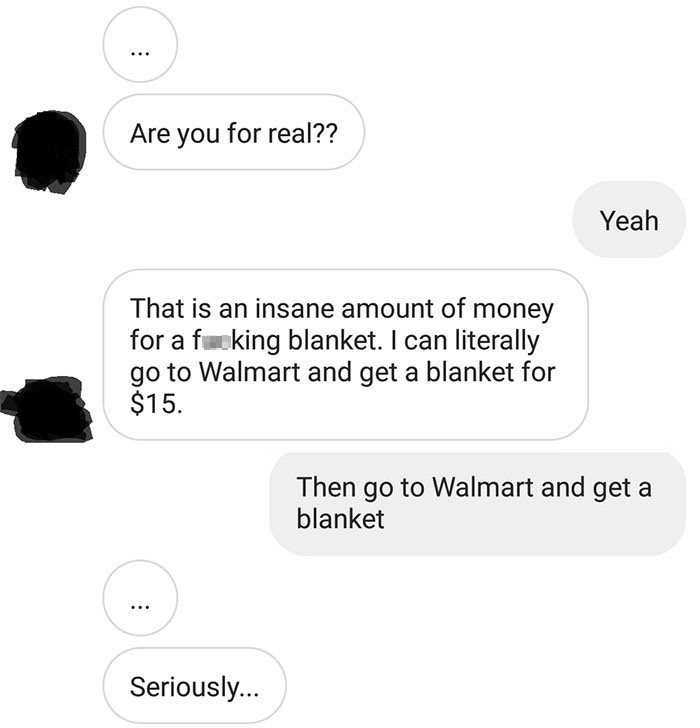 He not only questioned her about the price but even started using foul language. 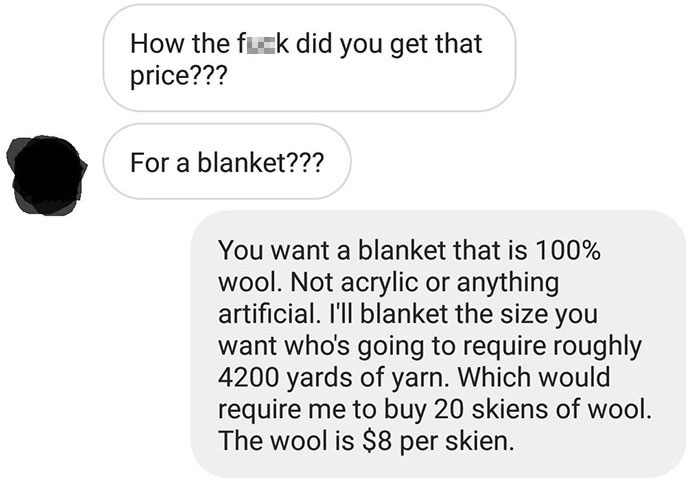 He kept arguing with her like he knew more about the trade than she did. 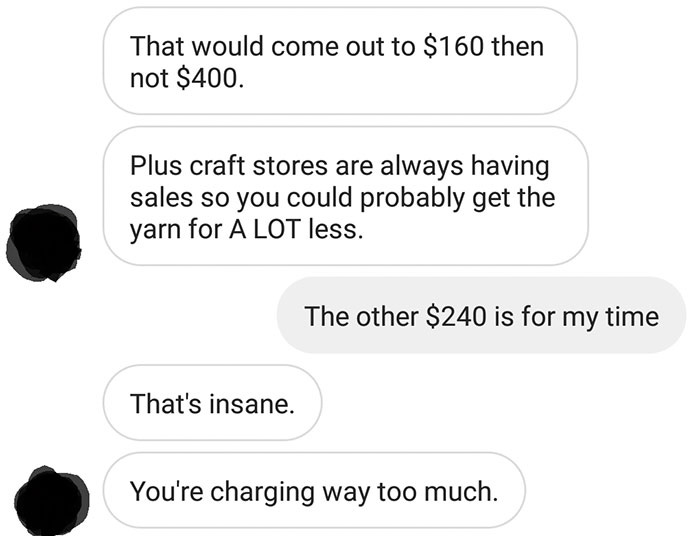 He literally thinks he only has to pay for the material, not her time, not her effort. Nothing. He called her insane for charging a basic amount for a crocheted queen-sized blanket. Moreover, he demanded a discount because she replied late. What the F? 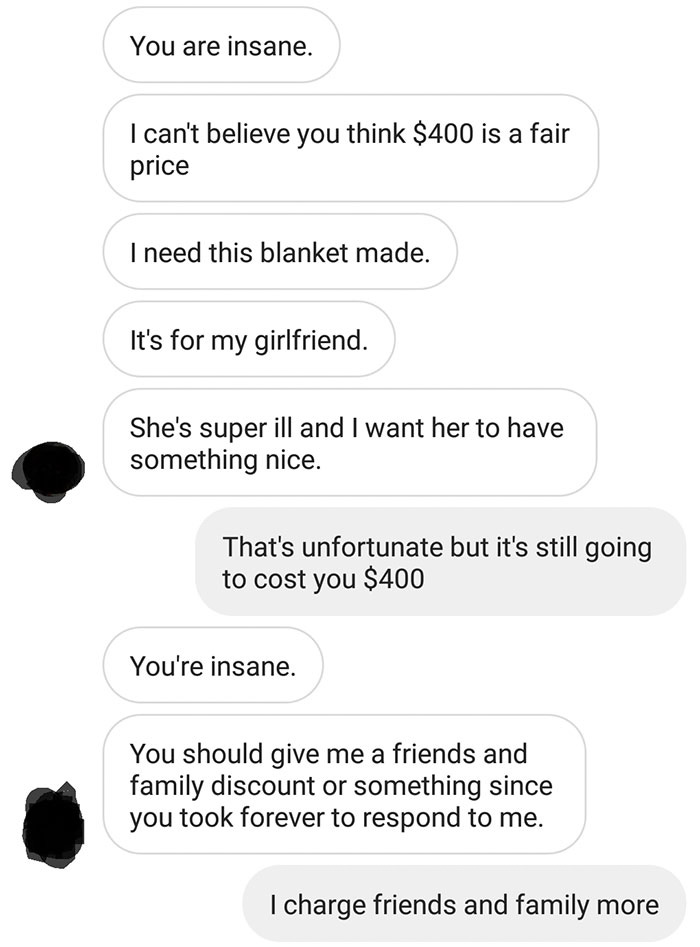 And here is, thinking he can dictate the terms and price of HER hard-work. 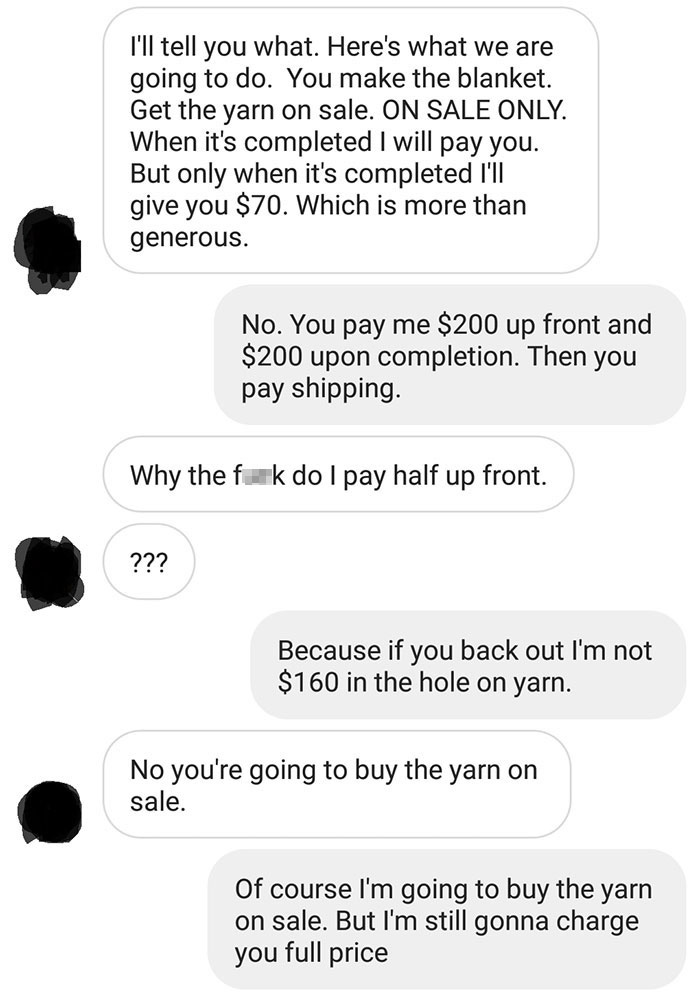 Scam? What scam, Mister? You’re the only bad guy in this picture. 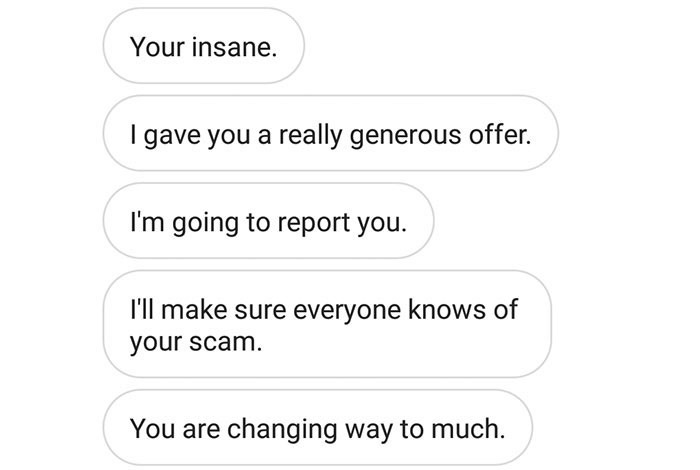 She’s funny though. And sarcastic. Nice! 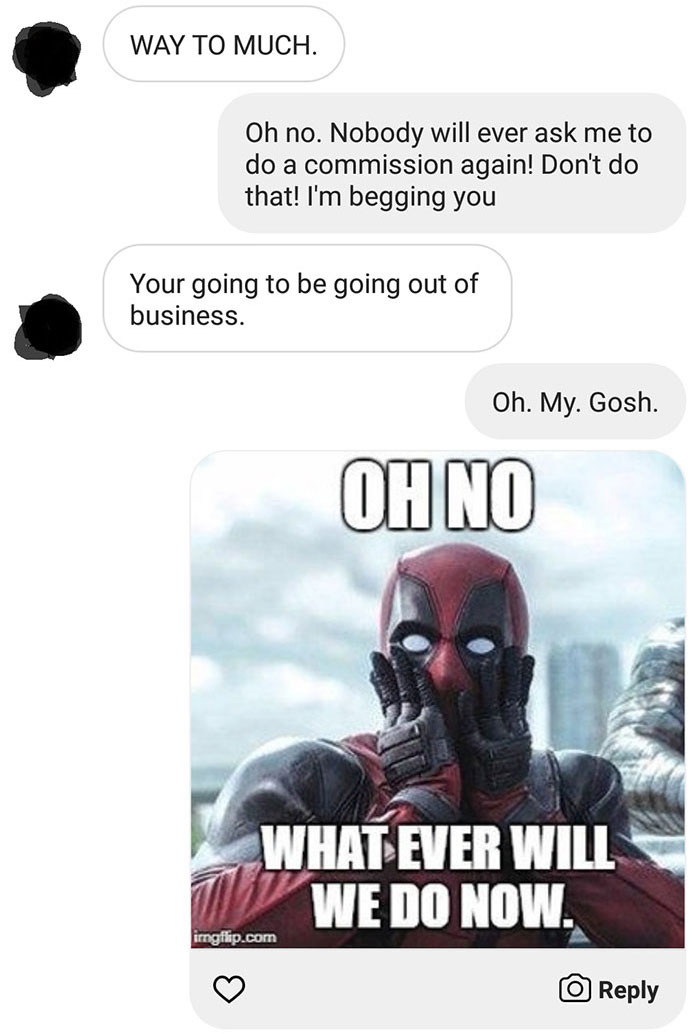 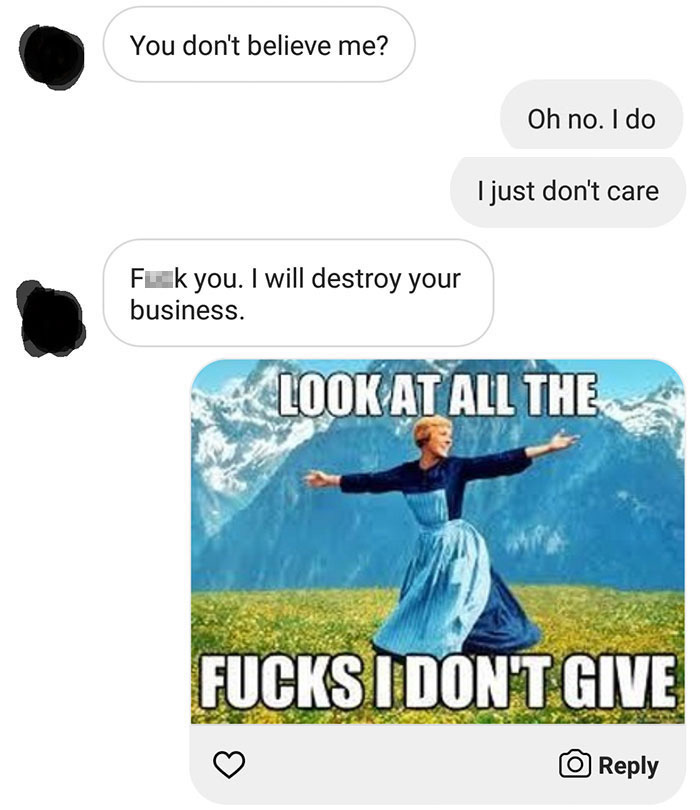 She finally lost her patience and gave it back to him right. She doesn’t owe him anything and she even shot up the price. 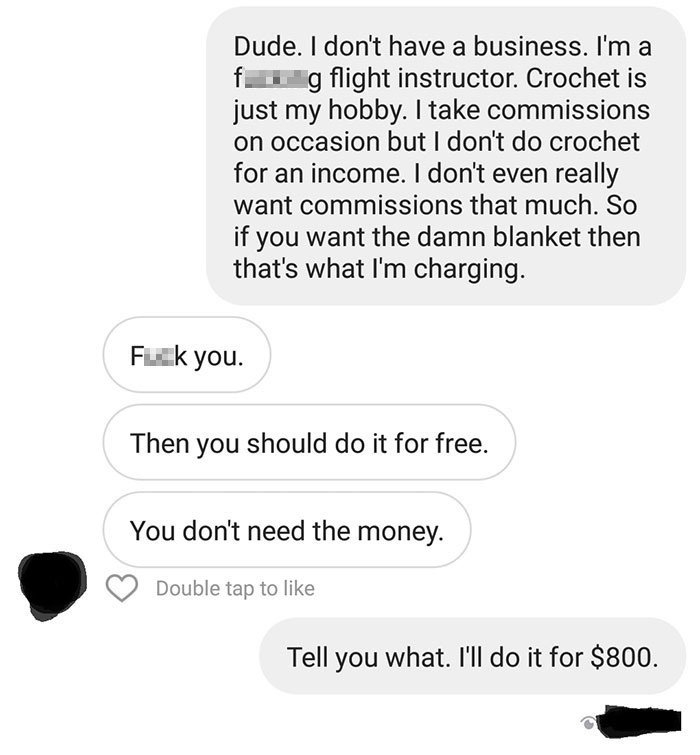 About the guy reporting her and bad mouthing her, she said,

“I’m not a business, so I really don’t consider anyone a potential customer, and if they’re rude I have no problem dishing it back. I don’t need to worry about negative reviews or anything like that, the repercussions for me are virtually zero.”

Brilliant, isn’t she? People need to realise that art takes time and artists deserve to be paid for the time and effort they invest in making something for you. It’s their prerogative. And Katt just taught him a lesson on it that he will definitely not forget.