Wriddhiman Saha Calls Out Journo Who Threatened Him For An Interview, Reveals Their Chat

Last week, several fingers were raised at the press community in India after a news organization stooped to a new low for some likes and TRP.

Yet again, the integrity of journalists is being questioned after Indian international cricketer, Wriddhiman Prasanta Saha, hailing from Bengal was allegedly threatened for an exclusive interview by a renowned journalist.

Taking to Twitter, Saha shared a screenshot of WhatsApp messages he had received from the ‘respected’ journalist, reported The Indian Express.

In the text, the said journo asked Saha to do an interview with him. But since after multiple messages and calls, Saha didn’t do the interview with the journalist, he went on to threaten him. 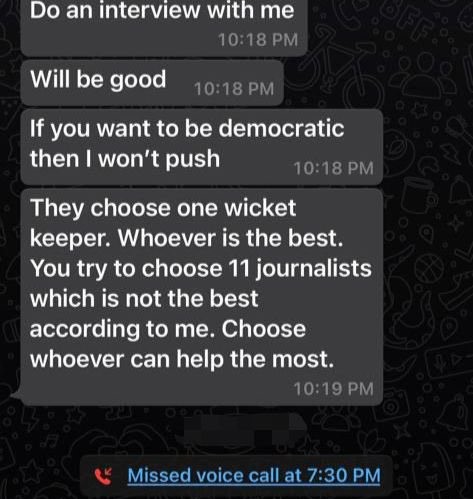 The seemingly angry journalist then sent this message to Saha.

The wicket-keeper batsman was definitely irked with the behavior of the journalist in question, hence, without naming him, he flags this member of the press and tweeted this:

After all of my contributions to Indian cricket..this is what I face from a so called “Respected” journalist! This is where the journalism has gone. pic.twitter.com/woVyq1sOZX

His tweet churned a storm on Twitter with people asking him to name and shame the journo so that the cricketing fraternity can boycott him.

Please name him wriddhi! I promise you as a representative of players, I will make sure our cricket community boycotts this so called journalist!! https://t.co/XmorYAyGvW

Kudos @Wriddhipops for sharing. Anyone that studied journalism law & ethics would know this is not journalism. This is bullying. These are threats. It’s also immoral on a human level. Do share the name of the ‘journalist’ with your cricketing peers, maybe they can avoid them also https://t.co/9bpCOytwt5

Name the person Wriddhiman. Indian cricket can do with a whistleblower if not more. These nexuses need to be broken. You will have the gratitude of us fans. https://t.co/qjI3jyhhPC

This is not how you treat a indian great cricketer https://t.co/SeTIJYvyFi

Lot of love to you @Wriddhipops. Name this "respected journo" and we shall know who to ignore. Set the example so that no cricketer, young or veteran have to deal with such nonsense. https://t.co/SmjeHCF4uu

This will not only affect cricket but other sports too.Athletes will be resistent to share their number with Journos. @BCCI / Sports federations will be restrict 1-1 interviews. Such a shame, a journalist behaves like this. https://t.co/9CE4AooCIb

Name him, buddy. Sorry state of affairs…cricket community wouldn’t bat an eyelid before boycotting this ‘so called’ journalist for good. https://t.co/h72gw6l35f

What @Wriddhipops has done or how he dealt with it is a lesson to all cricketers/athletes. Never fall prey to such self-proclaimed crusaders, claiming to get you in teams or get contracts. Performance only can make things happen in sport. BTW who’s this ‘respected’ journo? #Saha https://t.co/IH5mdu1LRC

Shocking a player being threatened by a journo. Blatant position abuse. Something that's happening too frequently with #TeamIndia. Time for the BCCI PREZ to dive in. Find out who the person is in the interest of every cricketer. This is serious coming from ultimate team man WS https://t.co/gaRyfYVCrs

Wridhi you just name the person so that the cricket community knows who operates like this. Else even the good ones will be put under suspicion.. What kind of journalism is this ? @BCCI @Wriddhipops @JayShah @SGanguly99 @ThakurArunS players should be protected https://t.co/sIkqtIHsvt

Extremely sad. Such sense of entitlement, neither is he respected nor a journalist, just chamchagiri.
With you Wriddhi. https://t.co/A4z47oFtlD

When it is about BCCI or cricketers, we hear so many ‘sources’ from all the journalists. Can a single source tell me who this so called journalist is who has threatened Saha? #cricketwitter https://t.co/C9PRjcaNES

The Indian Express reported that the BCCI will ask Saha to reveal the identity of the journalist before deciding on its course of action.

It’s sad to see journalists going to the extent of threatening and bullying people for an exclusive story. No wonder people have been losing faith in the fourth pillar of democracy.