Jhansi Policewoman Works As Infant Daughter Sleeps On Desk, Gets Praised By Everyone

The job of a police officer comes crowded with responsibilities and requires a significant amount of hard work. However, what asks you to be even more devoted, is motherhood. And in a picture going viral on social media platforms, a policewoman from Jhansi can be seen incredibly balancing the roles.

Archana Jayant, who works as a police constable in Jhansi, has been identified as the officer in concern. Archana is the mother of a six-month-old daughter named Anika, whom she brings to work every day. 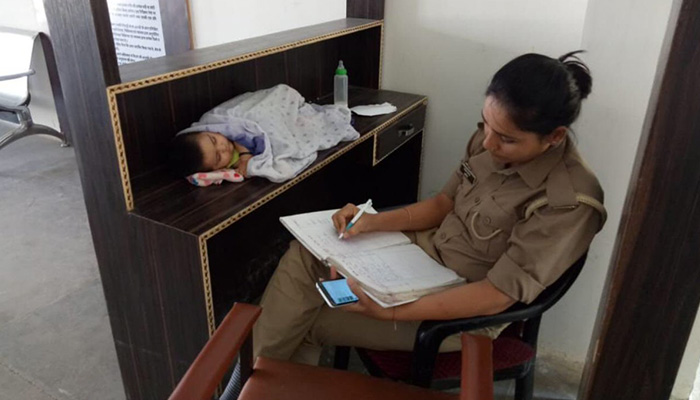 In the photograph, she can be spotted performing her duty while her baby sleeps on the desk in front of her. The picture was shared on Twitter by senior Police official Rahul Srivastav from Uttar Pradesh.

Meet ‘MotherCop’ Archana posted at kotwali jhansi for whom the duties of motherhood & the department go side by side !
She deserves a Salute !! pic.twitter.com/oWioMNAJub

The 30-year-old was rightfully lauded by the Tweeple for remaining true to her uniform and playing the role of a mother at the same time. While some simply took their hats off in front of the lady, the others suggested her to avail the creche facility for children.

Sir, with due respect to her and you and cops…its time not to salute the brave mother but have a creche facility. It will help many in department irrespective of gender.

Does it not need a caption.
'Lacking facilities for women police personnel' https://t.co/AQPxU7hz6Z

Such a powerful picture https://t.co/MkeF6cTXto

Not only the netizens but even the police department hailed the superwoman for her sincerity. As a token of appreciation, she was transferred to her native district of Agra, where her parents live. The news was confirmed by UP DGP Om Prakash Singh on Sunday.

Good news Guys about "MotherCop" Archana Singh, The @Uppolice ordered her transfer near her home in Agrw. And @dgpup praised Archana ji, "An ace at any responsibility she is trusted with".

We take out time to salute you, Mrs. Archana Jayant. Motherhood itself is a herculean task and by balancing work with life (plus infant) you’ve once again proved beyond doubt that all moms deserve to be tagged as ‘superwomen’.