Arguments between passengers inside an airplane during a flight are common. But fights between cabin crew members and passengers are not. Because crew members are expected to be incredibly polite towards the passengers and cater to their every need. However, passengers misbehaving with crew members is something that happens often. So, how long and how much should a crew member tolerate?

In a video that was shared by journalist Tarun Shukla, an IndiGo air hostess and a passenger are seen engaging in a serious argument. If we are to consider what is being said in the video, the passenger was allegedly disrespectful towards another crew member which got them crying. 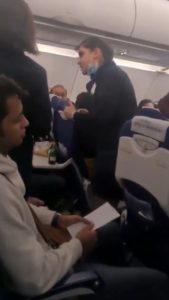 So the air hostess in the video reminds the passenger that they cannot be disrespectful to the employees as they are working for the company. The passenger goes on to call her a “servant” and she shouts back, “I am not your servant.”

According to India Today, the reason behind the argument is unclear but some allege that it’s related to the food served during the Instanbul-Delhi.

Tempers soaring even mid-air: "I am not your servant"

An @IndiGo6E crew and a passenger on an Istanbul flight to Delhi (a route which is being expanded soon with bigger planes in alliance with @TurkishAirlines ) on 16th December : pic.twitter.com/ZgaYcJ7vGv

According to Business Today, Jet Airways CEO Sanjiv Kapoor responded to the incident and wrote, “As I had said earlier, crew are human too. It must have taken a lot to get her to breaking point. Over the years I have seen crew slapped and abused on board flights, called “servant” and worse. Hope she is fine despite the pressure she must be under.”

As I had said earlier, crew are human too. It must have taken a lot to get her to breaking point. Over the years I have seen crew slapped and abused on board flights, called "servant" and worse. Hope she is fine despite the pressure she must be under. https://t.co/cSPI0jQBZl

Several people online sided with the IndiGo air hostess and asked others to treat them with respect because they are just trying to do their job. Here’s a look at some of the reactions to the video:

I think people in India trat cabin crew as if they are waiters of hotel. Actually they are not so and their actual role will be understood by people when some big incident will happen and cabin crew will show what their actual responsibility is .

No passenger has the right to ill treat the airline staff.@IndiGo6E

I am not sure who’s was at fault in this particular video, but we can’t deny from the fact that most of our people do think that the flight crew are their servants just because they bought a ticket. We need to come out of this mindset and respect the crew.

@IndiGo6E I support IndiGo crew member.Most of the people behave badly with the crew members in flights. In the name of service u cannot disrespect any one. On 8th of Dec I saw the same. IndiGo should protect their employees also. All are human being.

💯 % crews handle the situations well. Here I think passenger is wrong. I saw many people who feels arrogant and different while flying to show status or something egoistic.

@indigo you need to stand by your team… Brave lady…..It is not fair for person to yell to Crew and treat them as servants.