Amidst all the hate that we get to see in the world on a daily basis, it’s good to see people performing acts of kindness and helping each other with no expectations of gaining anything in return.

I say this because a guy named Harsh Sharma took to LinkedIn to share a rather heartwarming post about his cab driver.

Harsh revealed that his cab driver, Ravi, saw that he hadn’t slept due to his flight and hence, he arranged the seat in a manner for him to sleep on. He then took him to a restaurant and ordered South Indian delicacies for him.

“He organised the seats so I could lay down. Then he asked me ‘sir breakfast eat?’. I said no. He told me ‘you sleep, I stop at good restaurant’, 1 hour later he wakes me up. We are at a very crowded restaurant, he arranges a table for me. The restaurant was self service, but he brings menu to me and suggests some specialities of south India,” Harsh wrote.

He also offered Harsh coffee and ate food with him on the same table.

“An average man in his 50s just left a life long impression on me and I am left here just feeling sooooo good and wondering that somewhere in this fast paced life we left humanity way behind. South Indians are gems,” Harsh wrote. 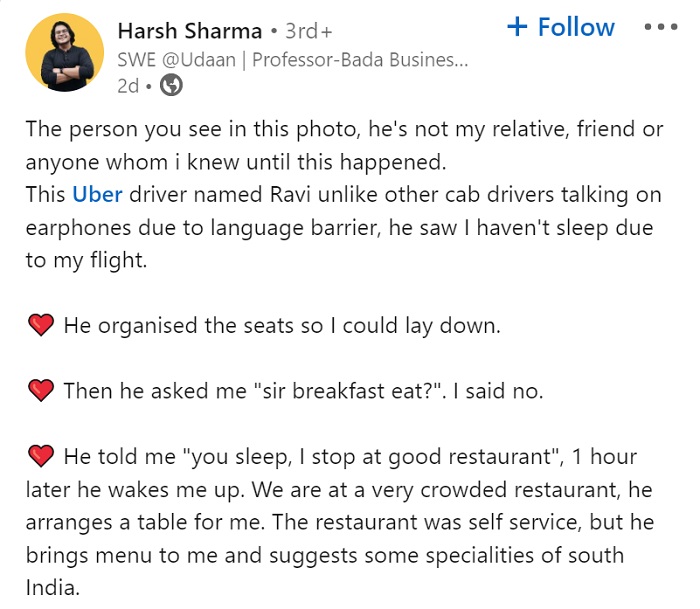 People like Ravi make the world a better place! 🙂