I was instantly reminded of this line from the film ‘Rocky’ after reading a rather inspiring post on LinkedIn about a woman who kept building her brand despite battling breast cancer.

The story was shared by a man named Babar Shaikh who wrote about his wife Zahra. Earlier this year, Zahra developed a lump on her chest and two weeks later, she found out that she has stage 2 invasive ductal carcinoma, which is a highly contagious form of breast cancer.

“More than a sense of dread, there was anxiety and confusion before we internalised the fact that the battle was yet to come. But this was also when we made a decision-one where we would not let cancer run the narrative,” Babar wrote.

During this time, Zahra had a full-time job and her own business venture was slowly blooming. Babar, too, was transitioning into a new job.

“In the midst of this, we were caught in the eye of the storm. The treatment regimen would lead to severe changes mentally and physically for both of us. From vacating our home, and moving in with my in-laws (owing to the extra care she would need during her fight with the disease) to proactively getting our scans and appointments done. Diet, sleep and self-nourishment became important like never before,” Babar revealed.

After 6 months of chemotherapy, Zahra not only lost her hair but also lost taste and was lethargic most of the time. But she didn’t allow her illness to dictate her life.

“She kept her job (despite first taking a sabbatical), she kept adding value to brands the way she’s always done day in and day out. She grew her cheesecake business manifold. Her social media presence increased 4x, sales went through the roof and she made a brand that has become a “household name” in many quarters – all from the confines of her bed. A lesson in fighting with grace, if there was ever one,” Babar shared.

Babar also revealed how their family, friends, and professional circles were immensely supportive. The people at the office allowed them to work flexibly and at their own pace.

“Her boss at work told her to come back in whatever capacity she could so she could continue working, giving her every flexibility there could possibly ever be. The office created an environment where she didn’t feel pressurized to work. What kept her going were kind words and appreciation of all she was doing by her colleagues.”

He further added, “Transitioning into my new role, my manager told me to take as much time as I wanted after joining, to tend to Zahra -hospital runs, work from home to stay with her – she gave me all the space in the world. My colleagues were more than happy to step in when I wasn’t available and were always there to go that extra step if needed. Because of them, this journey became easier to navigate through. We couldn’t be more grateful for their love and support.”

This goes on to show how love and support from your surroundings make a difficult journey easier. Have a look a the full post here: 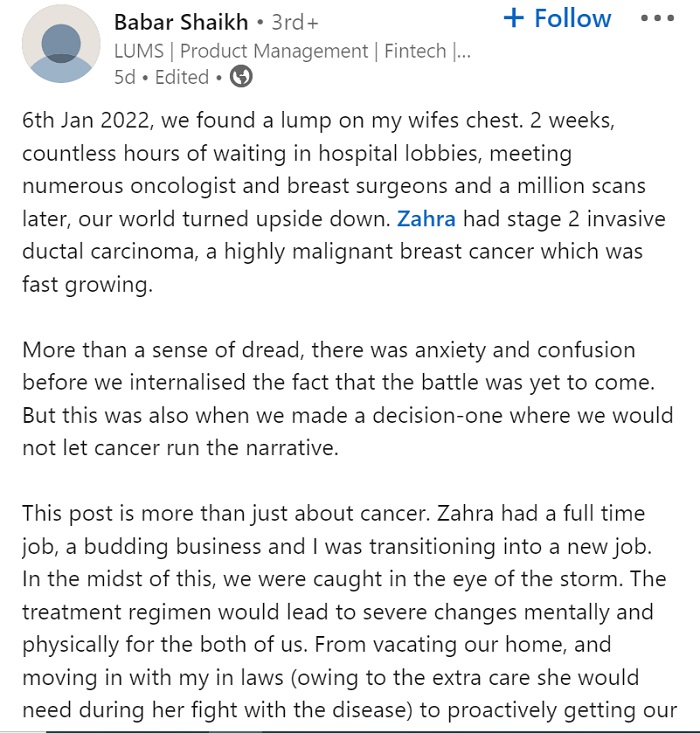 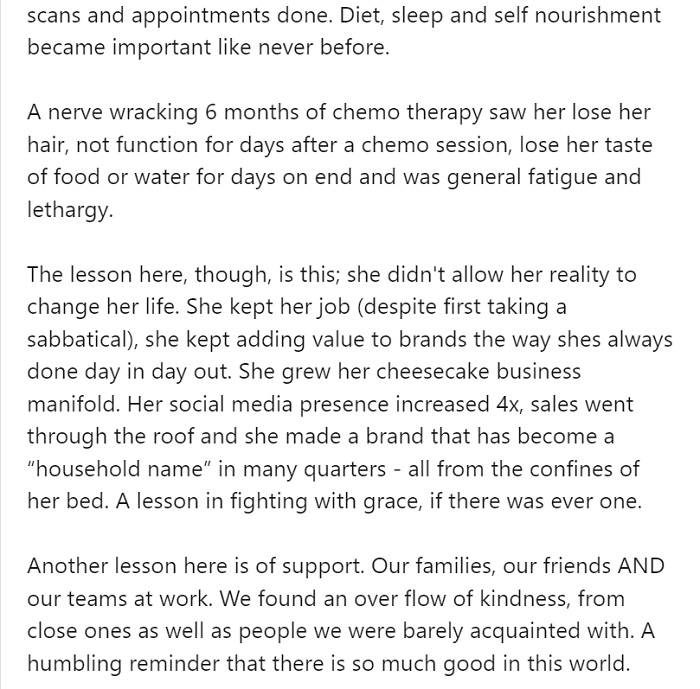 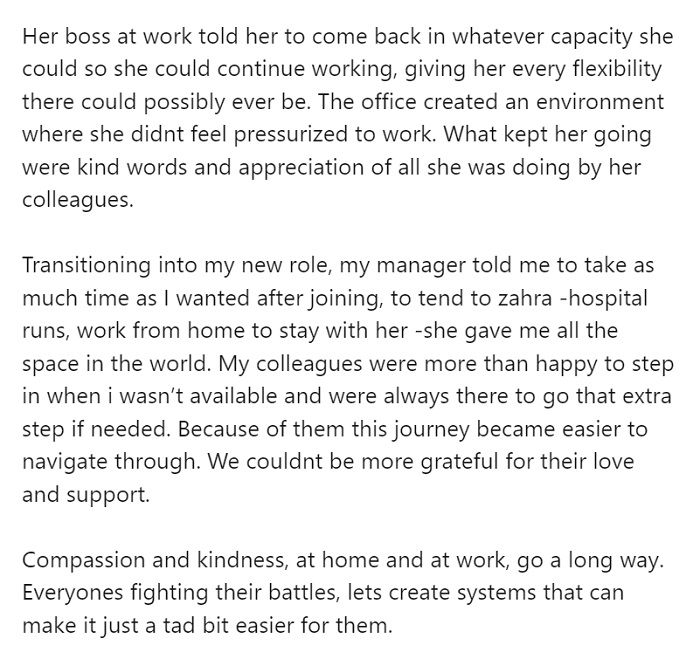 There are two key takeaways from this story – one, don’t let your problems become your only reality and two, be kind to people! 🙂