Controversy’s favorite child, Bollywood actor Kangana Ranaut has been drowning in hatred received from a certain section of the society ever since she gave the controversial statement about India’s independence in 1947. Even though the ‘Queen’ actor issued clarification post her statement, the incessant criticism and trolling haven’t stopped.

91-year-old freedom fighter Lilabai Chitale was irked when Kangana was bestowed with the prestigious Padma Shri award. Therefore, she made a video slamming the actor and shared her contribution to India’s fight for independence.

In the nearly six-minute video, the granny condemned Kangana’s statements. She said, “A woman named Kangana Ranaut said that the country got freedom in ‘Bheekh’. This woman also received the presidential medal.”

“Watching that made me fierce and frustrated. This is because when I was 12, I was put in jail for a day because Gandhiji had told us to boycott English education.”

The angry old woman further shared, “I, along with three other friends, went to Akola’s Sitabai Arts College and shouted from the gates to the students that Bapu has told us ‘Do or Die’ and bring the student out to revolt against English education. We were arrested by the Britishers.” 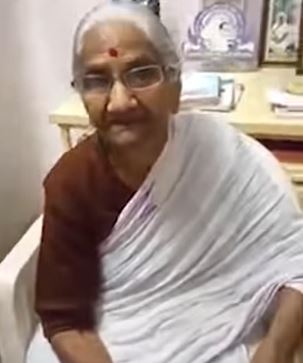 Since British law prohibited ‘satyagrahis’ under the age of 15 to be put behind bars, Lilabai along with her friends were kept in the police station and released later in the evening.

“Both my parents and brother had been in jail. When she (Kangana) says such statements, it hurts the sentiments of people like me. We have toiled for it, experienced it, seen people from all religions and color come together and sacrifice for the country.”

She further shared that during the time when her brother, the only breadwinner in the family, was put behind bars for 3.5 years, a Muslim family took care of them until her brother was released. “I condemn her statement. This is called treason.” She further questioned, “What will the upcoming generation think about us after listening to her statement? What is the future of the country?”

Concluding her statement, aaji said, “I don’t want her to be jailed. However, some action should be taken against her.”

You can watch her powerful video here:

This is how people reacted to aaji’s video:

Aaji’s video just hits harder when you also understand Marathi. Salute to brave hearts like Lilabai and the likes of her.